To share your memory on the wall of Agnes Tedd, sign in using one of the following options:

Print
Agnes Kippley Tedd, 98, of Bridgeport, passed away on November 6, 2019, peacefully surrounded by her family just nine days from her 99th birthday.

Born in Minoa in 1920, she was the daughter of George and Cecilia Kippley. She was a ... Read More
Agnes Kippley Tedd, 98, of Bridgeport, passed away on November 6, 2019, peacefully surrounded by her family just nine days from her 99th birthday.

Born in Minoa in 1920, she was the daughter of George and Cecilia Kippley. She was a graduate of Minoa High School. Agnes retired in 1990 as a secretary from Century 21 Allen Real Estate. She was active in the American Red Cross, Girl Scouts, Boy Scouts and was a communicant of St. Francis Church.

Agnes was the matriarch of a loving, close knit family, and her loving guidance will be missed by many.

She was predeceased by her husband, Robert Tedd in 1970; her parents; brother, George Kippley Jr.; sisters, Mary Wrightmire and Rita Stewart; and nephew, George Kippley III.

Receive notifications about information and event scheduling for Agnes

We encourage you to share your most beloved memories of Agnes here, so that the family and other loved ones can always see it. You can upload cherished photographs, or share your favorite stories, and can even comment on those shared by others.

Jackie Weaver purchased flowers and planted a memorial tree for the family of Agnes Tedd.

Posted Nov 10, 2019 at 02:10pm
Out thoughts and prayers are with all of you at this time. Mrs Tedd was a very caring and thoughtful person that loved her family greatly. May you all hold your memories of her close to your hearts.
Bob and Michele Hyde
Comment Share
Share via:
TF

The Lance Family purchased flowers for the family of Agnes Tedd.

Flowers were purchased and a memorial tree planted for the family of Agnes Tedd. 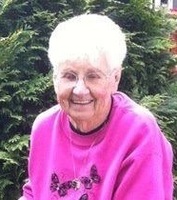