Obituary for Aldo A. Ricci 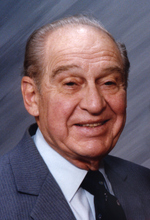 Aldo Ricci of Fayetteville passed away on January 7th of natural causes. Born in Bronx, NY on August 19, 1922, he attended Dewitt Clinton High School and City College, both in New York. He enlisted in the Aviation Cadet program during World War II, and successfully completed navigator training at Selman Field in Monroe, Louisiana, graduating as a 2nd Lieutenant. He was assigned to a B-24 Bomber Crew and after additional training at Tonopah, Nevada was tasked with navigating a new bomber to Old Buckenham Airfield, Attleboro, England where he was assigned to the 453rd Bomb Group (Heavy) of the 8th Air Force. From there he completed 35 combat missions before returning stateside.

He married Maryann Bellino in 1948 and together they raised two cherished children, Donna and Bruce.

Al’s career as a sales representative for J.E. Rhoads & Sons, manufacturers of transmission belting products, spanned 30 years. In 1981 he started Al Ricci Associates, Inc. marketing power transmission products, V-belts, bearings and gears to industrial accounts in New York State, until he retired in 1991 and sold the company to an associate.

He enjoyed golf, bowling, and downhill skiing. He skied for over 60 years at Labrador Mt. in Truxton, and also in Vermont, Colorado, and in Canada. He golfed for many years with the Men’s Club at Olde Oak Golf Course.

Maryann predeceased him in 2017 after 68 years of marriage.

There will be no calling hours, services will be private.

Remembrance in Aldo’s memory can be made to Wounded Warrior Project, 4899 Belfort Rd., Suite 300, Jacksonville, FL 32256