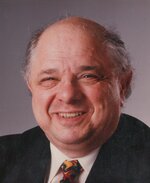 Bernard J. Aiello, 83, of Manlius, passed away peacefully at his home on Saturday. He was born in Utica, the son of the late Joseph and Elizabeth Aiello.

Bernard worked as a Producer and Program Director with WSYR-TV (formerly WNYS/WIXT). Bernie played a major part in televising the Big East Tournament as well as the Phil Donahue Show at the War Memorial. He was also a producer/director for the Jerry Lewis Telethon for 26 years. Bernie was a pioneer in Syracuse television, having helped put WNYS-TV 9 on the air in 1962, after which having helped put WSYT-TV 68 on the air in 1986. He helped develop such shows as Baron Demone, Bozo the Clown, Ladybug’s Garden, The Markert Place with Phil Markert, Open Line with Karen Franklin, It’s Academic, Romper Room, a couple segments for Wide World of Sports, and numerous other shows, as well as local adverts (some of which featured his own children). Moreover, he was responsible for bringing WSYR-TV to the NYS Fair, and he taught as an adjunct professor of communications at OCC.

He was an active member of Immaculate Conception Church and the Fayetteville Fire Department.

Bernard enjoyed going to Clear Path For Veterans and his time with the Fayetteville volunteer fire department. His hobbies included collecting diecast trucks and cars, listening to the police scanner, eating Italian food, and spending time with his family. He was unintentionally funny.

Bernard is predeceased by his wife of 61 years, Patricia. He was a devoted husband and father.

A calling hour will be held Friday from 11:00 am to 12:00 pm at Eaton-Tubbs Fayetteville Chapel, 7191 E. Genesee St., Fayetteville. A service will follow at noon at the funeral home. Burial will be held at Immaculate Conception Cemetery in Fayetteville.

In lieu of flowers, contributions can be made in his name to Clear Path For Veterans, 1223 Salt Springs Rd, Chittenango, NY 13037.