To share your memory on the wall of Cecil "Grumpy" Osborne, sign in using one of the following options:

Born in Spencer, Indiana on March 29, 1936, he was the son of the late Cecil and Ida Bass Osborne. Cecil served in the United States Army during the... Read More
Cecil L. “Grumpy” Osborne, 83, of Jamesville passed away Sunday, January 26, 2020.

Born in Spencer, Indiana on March 29, 1936, he was the son of the late Cecil and Ida Bass Osborne. Cecil served in the United States Army during the Korean War.

He loved bowling, baseball and his biggest joy in life was spending time with his grandchildren, never missing a sporting event, where everyone knew Grumpy.

He was predeceased by his sister, Eleanor and brother, Bob.

Calling hours will be Friday, January 31 from 4 to 6pm at the Newell Fay Manlius Chapel 8171 Cazenovia Road, Manlius. A service will follow at the funeral home at 6pm.

In lieu of flowers, contributions may be made to Helping Hounds.
Read Less

We encourage you to share your most beloved memories of Cecil "Grumpy" here, so that the family and other loved ones can always see it. You can upload cherished photographs, or share your favorite stories, and can even comment on those shared by others.

John, Andrea, Olivia purchased the Serenity Wreath and planted a memorial tree for the family of Cecil "Grumpy" Osborne. 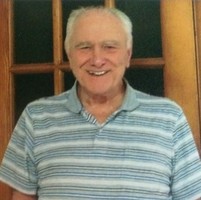