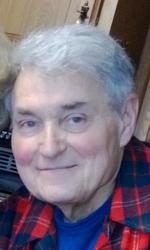 Charles H. Reiners, 84, of Manlius, passed on to be with our Lord, Monday September 23, 2019 at home with his family.
Born in Rochester on September 19, 1935. He was the son of Joseph and Carol Reiners. He was a graduate of Amherst College and SUNY Med at Syracuse.
After completing his internship and residency in Syracuse, he took his young family to Baltimore to fulfill his military obligation. He returned to Syracuse and opened his private pediatric practice in Fayetteville where he treated patients for over 20 years. He spent the next 10 years at Crouse and Upstate hospitals, before retiring in 1999.
He attended Eastern Hills Bible Church of Manlius. He enjoyed symphonies, plays and musicals, all things SU, swimming, boating, camping in the Adirondacks, nature and absolutely any time doing anything with the love of his life Nancy.
He is predeceased by his parents and brother Bob Reiners.
Surviving are his wife of 59 years, Nancy Godwin Reiners; daughters, Robin Ptaszek, Karen (Larry) West and Kimberly Howard (Jonathan Dean); sister-in-law, Margaret Reiners; brother, Joseph C. (Lori) Reiners, Jr.; eight grandchildren, Benjamin, Nicholas, Jessica, Joshua, Jonathan, Jason, Davin, and Joshua; eight great grandchildren; cousin, David; and several nieces and nephews.
Calling hours will be Friday, October 4 from 4 to 6 pm at the Newell-Fay Manlius Chapel, 8191 Cazenovia Road, Manlius. A memorial service will follow at the funeral home at 6 pm.
Contributions may be made in his memory to Upstate Golisano Children’s Hospital, 1 Childrens Cir., Syracuse, NY 13210 or Make A Wish Central NY, 5005 Campuswood Dr., E. Syracuse, NY 13057.