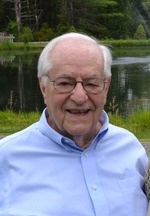 Growing up, his work ethic showed early as he worked as a newsboy hawking papers on the North Side. His passion and love of singing began with high school musicals and he continued singing in Church and at weddings over the years. He claimed his high school popularity from his stellar singing voice helped him to win over Muriel.

He spent 30+ years working for Western Electric Co. in management roles overseeing warehouse and production efforts before retiring in 1984. He loved trying to understand everything about how technology worked and enjoyed logging on to his laptop every day to check his emails and favorite websites and to update his Netflix queue.

One of his favorite stories to tell was of the deal he struck with Muriel when they first got married that she would make the coffee for the first 25 years and he’d take over from there – often joking what a bad deal he made as the years went on. He was immensely proud of his children and grandchildren. He was a long-time parishioner of Immaculate Conception Church in Fayetteville and a 1947 graduate of North High.

A private service was held with family Wednesday, December 23.

In lieu of flowers, contributions may be made to Francis House: 108 Michaels Avenue Syracuse, New York 13208.