To share your memory on the wall of Corinne Noble, sign in using one of the following options:

Corinne, or Skip as she was known to most, was born in Syracuse on Dec. 16, 1929. Her parents, William (Bill) P. and Mi... Read More
Corinne Noble (Mary Corinne Ladd Lounsbury) passed away on July 4, 2020 at Menorah Park nursing home in Syracuse, NY.

Corinne, or Skip as she was known to most, was born in Syracuse on Dec. 16, 1929. Her parents, William (Bill) P. and Mildred (Smith) Lounsbury, along with sister Cynthia Lounsbury (Schumacher) and brother Richard (Dick) lived in a house bordering Onondaga Park. She attended Nottingham high school and Syracuse University.

Summers were spent on nearby Eatonbrook Reservoir, where subsequent generations continue to gather. Skip met William C. Noble (Bill) at SU and married at the Kappa Alpha Theta house on campus. They spent most of their almost 50 married years in the Philadelphia area, where they opened The Children’s House, a clothing shop in Ambler, which Skip operated for many years in various locations. Her inventory also clothed her children, grandchildren, nieces, nephews and friends’ children for many years. She and Bill moved to Florida in 1996, where Skip remained following Bill’s death (1998) until 2013. She returned to Syracuse following an illness to assisted living where she lived until July 4. Weekly visits back to “Camp” at Eatonbrook delighted Skip: seeing family at the lake, as well as a glass of wine and BLT sandwich. She loved family sing-a-longs, the jitterbug, painting rocks with grandchildren, her dogs, gardening and a good party. Corinne’s memory will be cherished always for her gentle kindness, her generosity, easy smile and tremendous commitment to family, friends and community.

Receive notifications about information and event scheduling for Corinne

We encourage you to share your most beloved memories of Corinne here, so that the family and other loved ones can always see it. You can upload cherished photographs, or share your favorite stories, and can even comment on those shared by others.

Plant a Tree in Memory of Corinne
Plant a tree 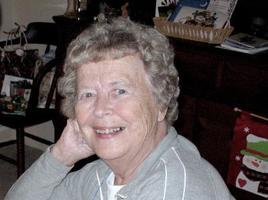