To share your memory on the wall of Edward McDonald, sign in using one of the following options:

Print
Edward passed away on Sunday, May 10, 2020 at Saint Joseph’s Hospital, East Syracuse, NY. after a short battle with Lymphoma.

Edward was born in the Bronx, NY on December 16, 1939. He was a proud and loyal member of the New York... Read More
Edward passed away on Sunday, May 10, 2020 at Saint Joseph’s Hospital, East Syracuse, NY. after a short battle with Lymphoma.

Edward was born in the Bronx, NY on December 16, 1939. He was a proud and loyal member of the New York City Fire Department for over 37 years. He retired in August 1996.

He was a dedicated catholic who attended Saint Ann’s Church in Manlius, NY.

Edward’s hobby was his family. He loved spending time with his wife of 49 years, Josephine; 4 children, Tara, Matthew, Erin and Brian; his 6 grandchildren, Skyler, Zachary, Caitlin, Ciara, Abigail and Emma; his son in-law, Douglas and his daughter in-laws, Hande and Kristen. His family meant the world to him and that is what mattered in his life. If he was surrounded by family, he was his happiest.

Services will be private for immediate family only.

In lieu of flowers, the family request donations to the New York City Fire Department Burn Center at nyffburncenter.com - Scroll to the bottom of page to donate.
Read Less

Posted May 15, 2020 at 07:09pm
All my prayers and thoughts are with Jody and all the kids. Thinking of you and Love You.
Comment Share
Share via:
AG

Posted May 14, 2020 at 02:05pm
Prayers for peace and comfort for his family. I can't imagine your loss of this wonderful guy Jodi. The last of his generation for our family. The youngest son of Frank Leo McDonald and Delia (Bridget) Dunn McDonald, his sense of humor, character, integrity and deep passionate love for his family will be truly missed. Love you Uncle Eddie.
Comment Share
Share via:
J

Posted May 13, 2020 at 09:24am
At this sorrowful period in your life, please accept my sincerest condolences for the death of your loved one. Reflecting on the divine promises found in the Bible will give you hope and strength to keep going until all of God's promises are fulfilled (Romans 15: 13; John 5:28, 29).
Comment Share
Share via: 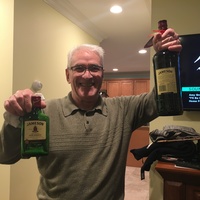