To share your memory on the wall of George Louzek, sign in using one of the following options:

Print
George J. Louzek, 98, passed away peacefully at the home he built in Jamesville, NY on Thursday, March 19, 2020.

George was born in Denton, Nebraska and proudly displayed his Bohemian and Nebraska heritage. He served in the Army Ai... Read More
George J. Louzek, 98, passed away peacefully at the home he built in Jamesville, NY on Thursday, March 19, 2020.

George was born in Denton, Nebraska and proudly displayed his Bohemian and Nebraska heritage. He served in the Army Air Corp during World War II as a B-24 flight engineer, flying 22 combat missions from Italy with the 15th Air Force for which he was awarded the Air Medal.

George worked at Carrier Corp for 30 years before retiring. His passions were gardening, woodworking, exploring his Czech heritage and traveling throughout the US, Canada, and Mexico He got great joy sharing the bountiful fruits of his garden and woodworking shop with his family, friends, and neighbors.

George was a 32nd degree Mason and member of the VFW.

A private graveside service will be held at the Walnut Grove Cemetery, Jamesville, NY.
Read Less

Receive notifications about information and event scheduling for George

Print
A private graveside service will be held at the Walnut Grove Cemetery, Jamesville, NY.

We encourage you to share your most beloved memories of George here, so that the family and other loved ones can always see it. You can upload cherished photographs, or share your favorite stories, and can even comment on those shared by others.

Posted Mar 21, 2020 at 04:45pm
Uncle George will be greatly missed. Thinking of the family in this difficult time. Our thoughts and prayers with you always. 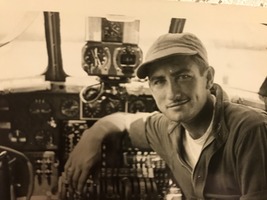