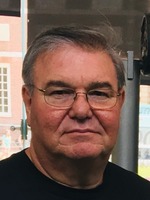 George N. Von Pless, 68, of Kirkville, passed away Friday, September 4 at St. Joseph’s Hospital. Born in Syracuse, he graduated from North Syracuse High School in 1970, received an AAS from SUNY Morrisville and a BS from the University of Georgia.

He was the Multi-Family Housing Program Director for the USDA Rural Development for 31 years, retiring in 2008. A dedicated public servant, George sought to bring communities together and enrich rural communities.

A larger than life person and avid sportsman, George was always in motion. He lettered in football and wrestling while in school. Later he joined the Syracuse Parks & Recreation Broomball League where he played for 30+ years. He also enjoyed playing hockey with the Gray Wolves, Mixed Doubles Bowling League and coed softball. He was also a member of the CNY Umpire Association where he was an umpire for several years. An outdoorsman, he also enjoyed fishing, hunting, bicycling and harness racing. George was a member of Clown Around Clowns and played a great Santa. He especially loved to share the joys of being a grandparent.

He was predeceased by his parents, James and Mae Von Pless; and brother, Douglas Von Pless.

A private service will follow the calling hours at 3:00 pm and may be viewed live at https://www.facebook.com/ScheppFamilyFuneralHomes

In lieu of flowers, contributions may be made to the Eye Tumor Research Foundation, PO Box 832, Philadelphia, PA 19105 (www.etrf.org) or in support of Dr. Sato’s research at Jefferson’s Sidney Kimmel Cancer Center. Please make checks payable to Jefferson and include “in memory of George N. Von Pless” in the memo and mail to Jefferson Office of Institutional Advancement, 125 S. 9th St., Suite 600, Philadelphia, PA 19107 or online contributions at Jefferson.edu/Sato.