To share your memory on the wall of Harold Haight, sign in using one of the following options:

After graduating from Solvay High School, Harold entered the US Navy in 1944, serving as a Signalman... Read More
Harold “Bill” Owens Haight, 94, went to be with the Lord on November 7, 2020. He was a loving, gentle man with a tender heart.

After graduating from Solvay High School, Harold entered the US Navy in 1944, serving as a Signalman 2nd Class during WWII.

Harold graduated from Syracuse University and became a CPA, working independently and with his father.

He enjoyed going to church, being with his grandchildren, watching sports, going for rides, and sitting with his cat. He had a fondness for nature and for the Adirondacks.

A graveside service will be held in the spring.

Receive notifications about information and event scheduling for Harold

We encourage you to share your most beloved memories of Harold here, so that the family and other loved ones can always see it. You can upload cherished photographs, or share your favorite stories, and can even comment on those shared by others.

Posted Nov 15, 2020 at 09:47am
Dear Lorie, Suzanne and Karen,
I was saddened to read of your father's passing in today's paper. As the obituary said, he was indeed a kind and gentle man with whom my family created so many beautiful memories of our life in Chittenango. I particularly remember a camping trip to Eighth Lake Stever was there too) and many happy hours on holidays and other occasions in our back yards. We always felt fortunate to have your parents in our circle of friends because they were exceptionally kind to us. often sharing meals as well as good advice. Know that I am reliving those times today as I think of all of you and your extended families and send admiration for the fine way you have cared for your father over the last few years. You are in my prayers.
Suzanne Sweeney
Comment Share
Share via:
JW

Posted Nov 10, 2020 at 09:39pm
Suzanne & family,
Sincere condolences for the loss of your father. I have wonderful memories of time spent on Albany St. - sending you my love and prayers.
Love, Judy (Huftalen) Wolfe
Comment Share
Share via: 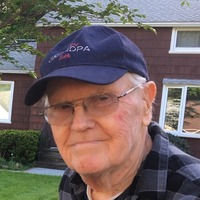