To share your memory on the wall of Harold Semmens, sign in using one of the following options:

Provide comfort for the family of Harold Semmens with a meaningful gesture of sympathy.

Hal served in WWII as Chief Mate in the Merchant Marines; and as Lieutenant in the Coast Guard Reserves. He was a graduate of the US Merchant Marine College and attended law school in Boston. He worked as a Claims Manager at Peerless Insurance Company in Syracuse. Hal was an active member of Christ Church in Manlius for over 50 years where he served on the Vestry and as a Sunday school teacher. He volunteered as a driver for the F-M Meals on Wheels.

He is survived by his children, George and Cynthia (Bowser) Semmens of Somers, NY and Beth (Semmens) and Stephen Skrainar of Penfield, NY; and grandchildren, Katharine Semmens and Lee Walter, and great-granddaughter, Clara Marian, of Lebanon, PA; Derek and Kaitlan Skrainar of Cockeysville, MD; and Geoffrey and Isobel Semmens of Webster, NY.

A memorial service will be held at Noon on Saturday, June 29th at Christ Church.

In lieu of flowers, contributions may be made to the Christ Church Memorial Fund, 407 E. Seneca St., Manlius, NY 13104.
Read Less

We encourage you to share your most beloved memories of Harold here, so that the family and other loved ones can always see it. You can upload cherished photographs, or share your favorite stories, and can even comment on those shared by others. 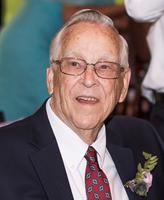