To share your memory on the wall of Helen Gatenby, sign in using one of the following options:

Helen was born July 8, 1923 in Carnegie, PA, to Joseph Urbanek and Honorata Galuszka who immigrated from Małopolska, Poland in the early 1910’s. She graduated from Carnegie High School in 1941 and then Point Park University in Pittsburgh. Prior to raising a family, she worked for Pittsburgh Water Heater Corp. and the Veteran’s Administration.

The family moved to Erie, PA in 1955 and, after the children had grown, Helen volunteered at St. Luke’s Church, the Second Harvest Food Bank, EmergyCare Headquarters, and the 911 Call Center. She enjoyed exercising, playing bridge, and word search puzzles.

Helen was preceded in death by her husband, Lorne; sister, Mary Drexler; and brother, John Urbanek.

Family and friends may call from 4 to 6 pm on Monday, July 6 at Eaton-Tubbs Fayetteville Chapel, 7191 East Genesee Street, Fayetteville. A Mass of Christian Burial will be celebrated at 10 am on Tuesday, July 7 at Immaculate Conception Church, 400 Salt Springs Street, Fayetteville. The Committal Service will be held at 11 am on Wednesday, July 8 at Mary, Queen of Peace Mausoleum, 6000 Lake Pleasant Road, Erie, PA.
Read Less

Receive notifications about information and event scheduling for Helen

We encourage you to share your most beloved memories of Helen here, so that the family and other loved ones can always see it. You can upload cherished photographs, or share your favorite stories, and can even comment on those shared by others.

Posted Jul 07, 2020 at 01:11pm
Helen was a lovely person. So cheerful and always smiling. She was a good friend to me and my Dad. When she lived in Erie I enjoyed having tea at her house, having lunch out and going shopping. My condolences to the family.
Comment Share
Share via:

Posted Jul 06, 2020 at 08:13pm
Helen Gatenby was a wonderful person, always had a great smile on her face and kindness in her heart. God Bless.
Comment Share
Share via:
KB

Posted Jul 06, 2020 at 10:58am
Helen was a wonderful friend to me and to the entire Belczyk family for so many years. We were blessed to have her in our lives and will cherish the times that we spent with her. Helen was always so cheerful and full of energy. I missed her when she left Erie but we stayed in touch on the phone at least a couple of times/year. Clearly she and her husband Lorne raised a wonderful family. I wish the family the very best. Sincerely, Kathy Belczyk Burik
Comment Share
Share via:
HS

Flowers were purchased for the family of Helen Gatenby. 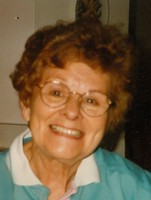