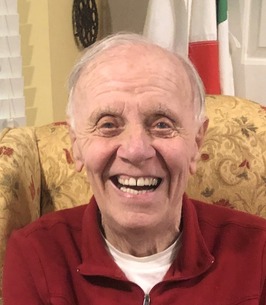 Howard Mahlon Chase was taken from this life by Alzheimers on Saturday, May 21, 2022, a few weeks before his 84th birthday.  He was born in 1938 to Ruth Coulter and Mahlon Chase in Syracuse, NY; a town that remained forever his home with Syracuse University adopted as his honorary alma mater (Go Orange!).  As senior class president at Central High School, he negotiated a diploma in 1956.  Soon after, he entered the Army and spent time stationed in Germany where he chased frauleins, made lifelong buddies and had adventures he wouldn’t share in polite company.   Upon returning from Europe, he married Marion Hartnett in 1959 and had two children, Howard Jr. (Fionna) and Cindy.  In 1959, Howard’s father-in-law gave him his first sales job in the Mobile Home business.  As an entrepreneur whose smile could sell ice to Eskimoes, he  - together with two partners - started his own manufactured housing dealership in 1971. Howie’s six day a week schedule (though he never complained) culminated in a chain of successful dealerships, mobile home parks, investments in home builders and real estate. He retired in 2001, but never really stopped selling.  In 1983, he married his sweetheart,  Phyllis Romano and adopted her 3 children, Amy, Stacy (John), and Marc (Ann).  Their union was the stuff of legend and their life together was loud - with love and laughter - and evenings with dear friends that lasted for days.  After Phyllis’ death, Howie continued to spread love and laughter in a long relationship with Joanne Falcone, until he had to move into full time care.

He is survived by four of his children, ten grandchildren, his brother Wayne, and sister Carol. He is predeceased by his wife, Phyllis, son-in-law, Ron, and daughter, Cindy.  We know he is with them again.

In lieu of flowers, donations can be made to the Alzheimer’s Association.