To share your memory on the wall of J. Bruce Stauffer, sign in using one of the following options:

Provide comfort for the family by sending flowers or planting a tree in memory of J. Bruce Stauffer

Bruce was a philanthropic leader in his community. From the time his children were young, Bruce was heavily involved in Fayetteville-Manlius sports. His passion and involvement in the Manlius Little League and other F-M sports programs lead him to build and help fund various athletic fields, many of which bear his name today. His involvement and generosity culminated in an induction into the F-M Athletics Hall of Fame as a community contributor.

Bruce was best known for his financial and humanitarian endeavors, highlighted by his mercy flights for the critically ill. The mercy flights allowed him to combine his love of flying, and his love of giving, into one of his greatest passions. Tied to his pager 24 hours a day, he waited for the urgent calls to come so he could transport organ transplant recipients and other patients in need of emergent, specialized care. Bruce did this using his own aircraft at his own expense and often helped raise money to defray the patient’s enormous medical expenses. As nicked named by columnist Dick Case, Bruce was “Syracuse’s Angel of Mercy.”

His selfless generosity extended to serving on the boards of the Leukemia Society, Hope for the Bereaved, Carol Baldwin Breast Cancer Research, and the Air One Foundation. He was instrumental in building the addition to the Francis House in its early years, where there is a room named in his honor. He was very proud of his 34-year service to the NYS Trooper Foundation as a trustee and long-time Chairman and President.

Bruce was most proud to be “Grampa” to his 12 grandchildren. His passing will leave a tremendous void in the Syracuse and Manlius communities, as well as in the lives of his many friends and especially his family.

Bruce is survived by his children, Jack (Kara) of Manlius; Jim (Denise) of Florida; Terry (Tracy) of Manlius; and Tracy (Steve) Cicci of Manlius; his sisters Patricia Wallace of CA, Janice Vassar of Fayetteville, Diane Joyce of Camillus and Rosemary Stauffer of CA; his brothers Tom of Syracuse, Dan of Liverpool, and Dennis of NC; his grandchildren Calvin, Gabrielle, and Mia Stauffer; Taylor Watson, Tori Reardon, Raegan and Mick Stauffer; Brad and Sam Stauffer; Griffin, Ryan and Tomlin Cicci; and several nieces and nephews.

Funeral services will be Saturday, November 9, 2019, at 10 a.m. at Immaculate Conception Church, Fayetteville. Calling hours will be Friday, November 8, 4pm-7pm, at the Eaton-Tubbs Fayetteville Chapel, 7191 E Genesee St, Fayetteville, NY. Burial will be in the Manlius Cemetery.

In lieu of flowers, contributions may be made in Bruce’s memory to Francis House, 108 Michaels Ave, Syracuse, NT 13208, or to the NYS Troopers Foundation, 3 Airport Park Blvd, Latham, NY 12110.
Read Less

We encourage you to share your most beloved memories of J. Bruce here, so that the family and other loved ones can always see it. You can upload cherished photographs, or share your favorite stories, and can even comment on those shared by others.

Posted Nov 10, 2019 at 08:49am
We are so sorry to learn of Bruce’s passing. Not only is the entire Central New York community grieving from his death, but the hundreds of kids from Project Children who, thanks to Bruce, Terry, and his friends, received their very first motorcycle ride during the annual Project Children summer picnic. When surveying the kids at the end of their visit what their favorite memory was, the kids would tell us about “that nice man who gave us motorcycle rides!” Thank you for all you’ve done for CNY, Bruce... may you Rest In Peace.
Caroline (Coley) Stanistreet and family
Camillus
Comment Share
Share via:
MM

Posted Nov 09, 2019 at 02:16pm
I’d like to start off by saying “thank you Bruce”. You’ve been so much in the lives of those who needed your humble heart and human spirit in the midst of their struggles. Though I haven’t seen you these past few years, I’ve felt your presence in my life, and will continue to be inspired by the way you lived yours. My sympathy to Bruce’s family and truest friends. I thank each one of you who loved him, and shared him with so many in our community! I've seen your generosity through Bruce, and his ‘going the extra mile’. By all measure, J. Bruce Stauffer was one of the greatest men I have ever known. Here’s a simple example: Sitting in Carl’s Country Kitchen’s Diner, Bruce and I met for a work lunch. Unbeknownst to Bruce, I had invited a family that he ‘and his team’ had anonymously helped... They tried hard to carry on by counting what blessings they did have.... and the help that they received from Bruce’s efforts - they believed was “divine intervention”. Bruce found humor in that! They asked how would they ever be able to thank him? I watched in awe and wonder the incredible humility of this hulk of a man who had the tender heart of an angel. Bruce said “love your kids, and someday, when able, just do what you can to make a difference for others”. How fortunate for all of us that Bruce Stauffer unwittingly became the catalyst that fueled the desire for so many of us to be a better person!
We had in our midst a man who did so much in his own life to direct charitable efforts. Because of Bruce, they would know that it IS true, that “there is a silver lining to every cloud”. Each and every one who knew and loved Bruce, his gifts, his faults (we all have them) and his powerful goodness, could perhaps change the way in which we carry on, and tightly hold Bruce’s spirit in our human souls. BE the “silver lining” in another’s cloud.
With sincere sympathy,
Marilyn Tickner McNamara

Posted Nov 08, 2019 at 10:35am
My condolences to the Stauffer family. Along with 1,000s of other local kids, I benefited from Mr. Stauffer’s generosity. Mr. Stauffer, along with Wayne Hartzheim and Spike Hooley, not only built the Manlius Little League fields, they created a wonderful sports program that exists to this day. Quite a legacy. It was not until well after my Little League days were over that I became aware of Mr. Stauffer’s philanthropy, and immeasurable acts of charity and kindness. Although I do not know the Stauffer family personally, I want them to know that I use Mr. Stauffer as an example to my children as an ordinary man from my small hometown that has performed extraordinary, wonderful deeds. I hope that his family and friends find comfort in the fact that Mr. Stauffer truly exemplifies “A Life Well-Lived.”

Dreams from the Heart Bouquet was purchased for the family of J. Bruce Stauffer.

Posted Nov 07, 2019 at 02:10pm
Dear Jack:
So sorry to hear of your Dad’s passing. I remember how both our Dads were part of a volunteer group that financed and installed the first permanent lights at FM’s football field back in the 1970’s. Your Dad was truly instrumental in getting it done. I remember my Dad once saying that “I don’t think there’s anything Bruce Stauffer can’t do!” It seemed that he had a solution to every situation that arose. In reading the other notes on this site, he obviously touched many lives over the years with his selfless dedication to helping others. What a great person!
Doug Brown 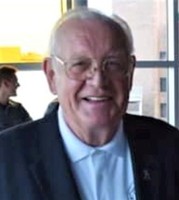 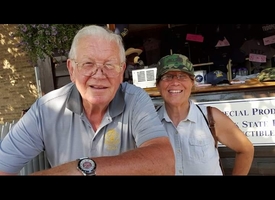 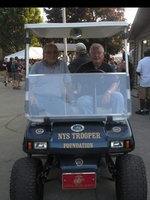