Obituary for Jane A. McIntyre 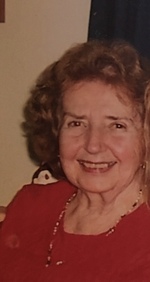 Jane was born in the Bronx NY on October 21, 1929 the daughter of Thomas Hewson and Agnes (McCormack) Hewson. She attended St. Margaret Mary's School in New York and graduated from Mount St. Ursula Academy in the Bronx. Jane received a Bachelor's Degree from Good Counsel College in White Plains, NY and a Master's Degree in Education from Syracuse University. Jane was a Henninger High School Business teacher from 1969-1996 where she was Head of the Business Department until she retired in 1996 after 27 years with the Syracuse City School District.

Jane treasured her time in retirement loving and enjoying her grandchildren and great-grandchildren and traveling with her beloved sister, Sister Mary Angelica Hewson. She was predeceased by her former husband, Robert S. McIntyre and her sisters, Mrs. Ruth Farabaugh and Sister Mary Angelica Hewson. Left to cherish her memory are her five children, Martin, Jane, Mary, Robert and Shelagh; grandchildren, Irene, Julia, Michael, Connor, Kelley, and Kaley; great-grandchildren, Collin, Ella, Ava, and Gianna. Jane was an inspiration to her children and filled their lives with incredible joy.

She was dearly loved and will be deeply missed by her family. They will hold a private memorial in celebration of her life. There will be no calling hours.

Donations may be sent to The Sisters of the Divine Compassion, 52 North Broadway, White Plains, NY 10603.