To share your memory on the wall of Jeffrey M. Cicora, sign in using one of the following options:

Provide comfort for the family of Jeffrey M. Cicora with a meaningful gesture of sympathy.

On 10/12/1992, Jeff’s dream became reality as he was sworn in as a New York State Trooper. Jeff worked the majority of his career in Onondaga County at SP Baldwinsville. Throughout that time, he worked at Ground Zero as well as was deployed to John F. Kennedy and LaGuardia airports after the attacks. Jeff and his K9 partner, Devitt, searched planes, luggage, motorcades and airplane terminals for explosives for nearly six months.

In 2014, he received a Superintendent’s Commendation Award for his and his K9 partner, McGinn’s, work in the arrest of David Renz, which was later aired on ABC’s “20/20”. Jeff continued his career to become Sergeant and Commander of the department’s Troop D barracks in Lysander.

Jeff loved boating and fishing and spending time with Jack, his nieces, Abby, Chloe and Sara, as well as his “River Family” at his summer home in Clayton, NY. He also enjoyed playing guitar and entertaining all of those that were willing to listen. His quiet time included the love and adoration of his two Bassett Hounds, Moosey and Sophie.

Contributions may be made to Hospice of Jefferson County, 1398 Gotham St., Watertown, NY 13601.
Read Less

We encourage you to share your most beloved memories of Jeffrey M. here, so that the family and other loved ones can always see it. You can upload cherished photographs, or share your favorite stories, and can even comment on those shared by others.

Lori Netti & Kevin Latz, michael lamb, and others have sent flowers to the family of Jeffrey M. Cicora.
Show you care by sending flowers

Posted Aug 17, 2019 at 08:02am
My deepest sympathy on the loss of your husband and father. I served there for 3 months as a mortuary officer and met many of our police, troopers and firefighters from upstate.
I am sure he was welcomed into heaven with open arms for his good deeds on that day and many others
May he Rest In Peace
Sleep well brother until we meet again
Comment Share
Share via:
MR

Posted Aug 16, 2019 at 12:29am
Valerie, I lived in the townhouse next to you in Liverpool while you were waiting for your new home to be built. I will never forget how kind both you and Jeff were to me when my parents passed away back in Pgh. You kept an eye on my townhouse and when I did return to Syracuse Jeff offered to let Burt out during the day so I did not have to come home on my lunch hour. I trusted very few people with Burt but Jeff was at the top of that short list. I am so sorry for your loss. I wish there was something I could do to help you through this. You and Jack are in my thoughts.
Melissa Rader, New Kensington, PA
Comment Share
Share via:
HY

Posted Aug 15, 2019 at 05:34pm
We are saddened to hear of Jeff's passing. Our family has fond memories of Jeff and his K9 partner visiting Palmer Elementary years ago. He was a kind man. Please accept our heartfelt condolences.
Comment Share
Share via:
LL

Posted Aug 15, 2019 at 08:55am
Please accept our most heartfelt sympathies. Jeff will remain in our hearts forever. He truly was one of a kind and will never be forgotten.

Posted Aug 13, 2019 at 10:40pm
Please accept my condolences. Jeff was a great friend of mine. We both attended Cayuga Community college. He was always there for me when i needed him. We had a lot of fun times together. He always had a smile on his face. I moved to Baldwinsville 26 years ago and come to find out after years living here he lived at the bottom of my street. One day he stopped his police car in front of my house and we talked for a while and he said i will keep a eye on your house. He was always so thoughtful. He will be missed. May he rest in peace now. Gina Tackley Thompson
Comment Share
Share via: 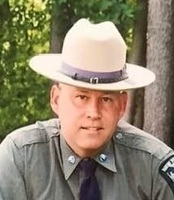