To share your memory on the wall of Joan Poorman, sign in using one of the following options:

Provide comfort for the family of Joan Poorman with a meaningful gesture of sympathy.

Print
Joan Elliott Poorman entered into rest in Syracuse, NY on January 30, 2020 at the age of 88.

Joan was born to parents Vivian Merrifield and John J. Elliott in Salem, Oregon on May 3, 1931.

Her early years were spent in Sal... Read More
Joan Elliott Poorman entered into rest in Syracuse, NY on January 30, 2020 at the age of 88.

Joan was born to parents Vivian Merrifield and John J. Elliott in Salem, Oregon on May 3, 1931.

Her early years were spent in Salem until her father, a WWI pilot, was called to active duty and served as Commander for a training base in Miami Beach. It was during this time that Joan was taught how to dive by one of the soldiers under her father’s command, one Johnny Weissmuller (aka Tarzan)! After the war her family returned to Oregon and settled in Portland, with Joan attending Grant High School.

She attended the University of Oregon, majoring in art, and was a member of Kappa Alpha Theta Sorority. On July 5, 1952, Joan married a former Salem neighbor, William Poorman, and shortly thereafter relocated to Syracuse.

As a longtime resident of Syracuse, Joan had a successful career as a realtor. She was passionate about art and worked diligently on the Members Council of the Everson Museum of Art and was very involved in getting the current building built. Having been influenced by her Quaker grandparents, Joan was very involved in community service. She was the founding president of the Erie Canal Museum’s Weighlock Guild as well as a member of the museum’s board. Joan also served on the boards of Planned Parenthood and the Urban League of Syracuse, also serving as its guild’s vice president. At one time Joan served as a chairperson of one of the United Way of CNY’s allocation panels. She was an active member of Junior League of Syracuse and was an advisor to the Syracuse University chapter of Kappa Alpha Theta Sorority. Joan also served on the Vestry of Trinity Episcopal Church and was a delegate to the district conference.

She is survived by her husband, William; sons, John, Bill and David; grandchildren, Nicholas and Kelsey; as well as cousins, nieces and nephews. She is predeceased by her parents and brother, John J. Elliott, Jr. Joan was loved by many friends and neighbors and will be missed.

A celebration of Joan’s life will be held at Trinity Episcopal Church, 106 Chapel Street, Fayetteville, NY, at 10 am, February 15, with a reception to follow in the Parish Hall.

In lieu of flowers, donations in Joan’s memory may be made to the Alzheimer’s Association, Trinity Episcopal Church of Fayetteville, NY, the Everson Museum of Art and the Erie Canal Museum.
Read Less

Receive notifications about information and event scheduling for Joan

We encourage you to share your most beloved memories of Joan here, so that the family and other loved ones can always see it. You can upload cherished photographs, or share your favorite stories, and can even comment on those shared by others.

Plant a Tree in Memory of Joan
Plant a tree
0 trees have been planted in memory of Joan E. Poorman
CS

Posted Feb 07, 2020 at 02:51pm
Bill and Family,
So sorry for your loss.
I remember Joan’s wonderful smile and enthusiasm for all the activities at Trinity Church.
My thoughts and prayers are with you all.
Christine Lunney Spencer
Comment Share
Share via: 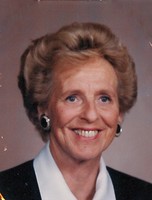