To share your memory on the wall of John Conners, sign in using one of the following options:

Provide comfort for the family of John Conners with a meaningful gesture of sympathy.

He is survived by his children, Kristie Conners of Boston and Jasen (Stephanie) Conners of Larchmont, NY; grandchildren, Beckett James, Dylan Rose and Casey Jonathan; siblings, Linda Recore and David Conners; and several nieces and nephews.

He was predeceased by his parents, Kenneth and Audrey; brother, Larry; and niece, Kimberly Recore.

Family and friends may call from 1-3 pm on Wednesday, August 21 at Eaton-Tubbs Fayetteville Chapel, 7191 E. Genesee St., Fayetteville. The service will follow the calling hours. He will be buried at Arlington National Cemetery.
Read Less

The Recore family sent flowers to the family of John R. Conners.
Show you care by sending flowers

Bountiful Rose Basket was purchased for the family of John Conners. Send Flowers

Posted Aug 19, 2019 at 01:33pm
Wishing you peace to bring comfort, courage to face the days ahead and loving memories to forever hold in your hearts.

The Recore family purchased flowers for the family of John Conners. Send Flowers

Truly Beloved Bouquet was purchased for the family of John Conners. Send Flowers

Posted Aug 18, 2019 at 11:14am
To John's family... so sorry to hear the news. I grew up with John and his family. He looked like such a nice man in his photo. What a new smile. Sorry to Linda one of my friends who played on Brooklea Drive. Sincerely, Bretiss
Comment Share
Share via:
C

Posted Aug 18, 2019 at 08:45am
Uncle John (as known to my son and I) Rest In Peace and thanks for the candy. He always had lots of candy for the kids at Dirt Week if they saved a seat for him.
See ya when we get there Chip and Chase Randall
Comment Share
Share via: 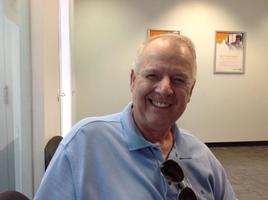