To share your memory on the wall of John Cornell, sign in using one of the following options:

Provide comfort for the family of John Cornell with a meaningful gesture of sympathy.

He worked with Western Electric as a Senior Manager for 29 years. He was a member of DeWitt Community Church, Alumni Board President of New York Alpha Chapter Sigma Phi Epsilon.

A funeral service will be January 11 at 12:00 p.m. at Eaton-Tubbs Fayetteville Chapel, 7191 E. Genesee St. Fayetteville.

In lieu of flowers contributions may be made to; Majestic Memory Care, 1200 Arthur St., Hollywood FL 33019.
Read Less

Receive notifications about information and event scheduling for John

Plant a Tree in Memory of John
Plant a tree
0 trees have been planted in memory of John S. Cornell Jr.

Posted Jan 11, 2020 at 02:59am
Dearest Anne, Kristin, Robbie, and Scott (and all you wonderful Cornells and Pericolas too), I have so many great memories of your Dad as he dealt with our adolescent silliness! I'm sure Anne and I drove him bananas 90% of the time... and yet he'd do something like arrange a special business trip so that he and your mom could take the day to drive us across the state to an Eagles concert, pick us up after, and drive our sleepy selves home. That's true love, way above and beyond the call of duty, and I'll always remember the sweetness of that gesture and others like it. I'll be toasting Jack Cornell at 4 pm today and beyond. Love, peace, and strength to you all in the coming days. xoxo
Comment Share
Share via:
DM

Posted Jan 04, 2020 at 03:43pm
Dear Robby and Kristen, Both your mom Betty and father John were very kind and special to me. They and I were a wonderful team while my dear Robby was my student. Please accept my condolences. Denny McAndrew
Comment Share
Share via:

Denny, we love you and love how you have always been there for us. Thank you for your kind words. God bless you, Love, Kristin and Rob
EJ

Posted Jan 03, 2020 at 12:56pm
I was saddened to read of the passing of Brother Cornell, and my thoughts & prayers go out to his family, friends & chapter brothers at Syracuse. While I never had the honor of meeting John, I pledge that the SigEp Patriots Project will always remember him & his patriotic service. Rest easy Shipmate. We have the watch.

Ed, Your thoughtful message brought tears to my eyes. Thank you for the respect you paid to our father. It means a lot to know you care. All our best, The Cornell children. 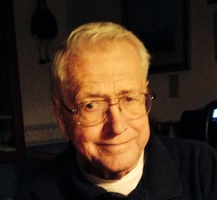