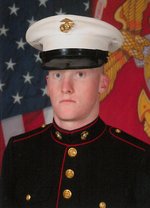 Justin E. Perrin, 34, of Chittenango, NY passed away unexpectedly on Sunday. He was born in Syracuse, NY on May 3, 1985.

Justin graduated from Otselic Valley High School in 2005. Justin went on to join the United States Marine Corps that year and worked as an aircraft mechanic. Justin was stationed in Cherry Point, NC and was deployed twice to Al Asad Air Force Base in Iraq. In 2010 Justin was honorably discharged. Justin loved North Carolina and also resided in Moorehead City and Asheville while attending college at Asheville Buncombe Community college before returning to CNY. Justin was currently employed by Fed Ex Express at Hancock Int. Airport. Justin enjoyed the outdoors and loved running, hunting and fishing. He also enjoyed working on cars and running up and down the east coast on a whim. Justin was kind hearted and generous by nature. He loved joking with friends and co-workers, enjoying life to it's fullest. Justin touched many lives in his short time on earth and will be dearly missed by many.

Justin was predeceased by his grandparents, John and Bessie Heinrich of DeWitt; and step-grandfather, Chester Smith of Fayetteville

In lieu of flowers please consider a donation to Clear Path for Veterans of Chittenango at clearpath4vets.com