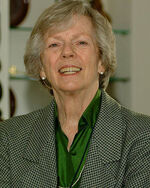 Dr. Margaret C. Snyder, age 91, passed away peacefully on January 26, 2021, at St. Joseph’s Hospital in Syracuse, New York, after a short illness related to cardiac failure. Dr. Snyder, or “Peg” as she was known, was the founding director of UNIFEM, now U.N. Women, dedicating her life and work to the progress and economic development of women in poor and emerging countries around the globe.

Born and raised in East Syracuse, N.Y., Peg lived for over four decades in Manhattan. She attended the College of New Rochelle and obtained an M.A. in Sociology from the Catholic University of America. She thereafter became the youngest Dean of Women at Le Moyne College in Syracuse, N.Y. After eight years at Le Moyne, Peg took a one-year sabbatical to travel to Africa, which began her life-long engagement with women’s economic development in Africa and around the world.

While in Africa, Peg worked to develop the Kenya African Women’s Association, which led her to become assistant director of the Program of East African studies at the Maxwell School at Syracuse University. Returning thereafter to Africa, Dr. Snyder earned a Ph.D. in Sociology from the University of Dar es Salaam, Tanzania, in 1971, and that same year accepted her first position with the United Nations as an advisor to the Economic Commission for Africa, Regional Program on Advancement of Women.

In 1978, Dr. Snyder became the founding director of the United Nations Development Fund for Women (UNIFEM), now U.N. Women, an organization that promotes women’s economic, social and political standing in Africa, Asia, the Pacific, Latin America and the Caribbean. It was as director of UNIFEM that Dr. Snyder became a first supporter and then life-long friend of Prof. Wangari Maathai, leader of the Green Belt Movement in Kenya and winner of the Nobel Peace Prize in 2004.

Upon Peg’s retirement in 1989 from the U.N., she continued to travel the world speaking about, educating for and promoting the economic progress of women. She was a Fulbright Scholar in Uganda, a visiting fellow at the Woodrow Wilson School at Princeton University, and the author and editor of many books regarding women’s economic development in poor and developing countries. She also received an Honorary Degree from Le Moyne College and served on the Board of Trustees at Le Moyne.

To list her professional accomplishments alone does not capture Peg Snyder’s personality. She opened her Upper East Side co-op to so many friends, relatives and guests. She was a wonderful host, greeting all warmly and able to make a delicious dinner from scratch for anyone who dropped in. She was an avid rooftop gardener in her building, creating a green and rural respite high above the streets of Manhattan. She was an experienced and courageous traveler, willing to jump on tiny planes in parts of the world when livestock was also on board. Peg was a mentor to several generations of young women and men from all over the world who came to New York City to work at the U.N., always infusing them with the same passion for social justice she lived by. Peg had many friends around the globe whose fellowship she deeply valued, and our family appreciates the many messages, calls and condolences we have received from those friends regarding Peg.

Dr. Snyder was predeceased by her father, Matthias Snyder, M.D., her mother, Cecelia Snyder, and her brother Robert Snyder. She is survived by her brother, Thomas E. Snyder, M.D., and many cousins, as well as numerous nieces and nephews, including: James Snyder, Ann Snyder-Bilharz, Edward Snyder, Kathryn Hanas, Marilyn Snyder, Susan McKenzie, Janet Kenney, Donald Snyder, Thomas Snyder, Gregory Snyder and Peter Snyder. The family is grateful to Peg’s friend and medical provider, Rosemerie Marion, ANP, and to all of the wonderful and attentive care providers Peg had at St. Joseph’s Hospital and Nascentia Home Health in Syracuse.

A funeral Mass will be celebrated in the Spring of 2021 in Syracuse, N.Y., at a location, date and time to be determined.