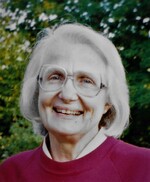 Marilyn N. (Schmelling) Beck, 88, of Jamesville quietly passed away on December 8, 2020 at the Iroquois Nursing Home. Marilyn was born on March 7, 1932 in Syracuse, NY and graduated from Nottingham High School in 1950. That summer she married C. Ellison “Becky” Beck. They were married for 63 years before Becky passed away in 2014. Together they raised six children in the Town of LaFayette where she filled their home with fresh flowers, delicious food, stacks of good books, beautiful piano playing, and many cats. On most Sunday afternoons the family took a leisurely drive on the backroads of upstate NY. Once her children were grown she worked part time at JCPenney and Home Aides. Marilyn loved being outdoors and thoroughly enjoyed gardening and bird watching. She was an active member of Onativia Church and was a true philanthropist, donating as much time and money as she could to numerous charities. Marilyn struggled with Alzheimer’s Disease for many of her later years, but she still was one of the most pleasant people to be around.

Due to COVID there will be no services at this time.

In lieu of flowers, donations may be made to the Alzheimer’s Association, CNY Chapter, 441 W. Kirkpatrick St., Syracuse, NY 13204.