To share your memory on the wall of Michael Navin, sign in using one of the following options:

Born and raised on Syracuse’s Tipperary Hill on November 27, 1942, he was the son of the late Michael J. and Bernadine Navin Sr. Michael was a g... Read More
Michael J. Navin, Jr., 77, of Chittenango passed peacefully at home on August 1, 2020.

Born and raised on Syracuse’s Tipperary Hill on November 27, 1942, he was the son of the late Michael J. and Bernadine Navin Sr. Michael was a graduate of St. Patrick's High School, Class of 1960 and Auburn Community College.

Michael joined the New York State Police in 1968, a job he loved. His career with NYSP includes working undercover narcotics and with the Violent Felony Warrant squad. He was in charge of the Syracuse office of the Special Investigations Unit (SIU) for many years. He was an instructor at the Division Headquarters, Albany where he taught Criminal Procedure Law. Michael was known for his ability to make understandable ex parte orders, search and seizure and phone taps. He became a mentor to many. Retiring in 1993 as a Senior Investigator, he went to work with National Insurance Crime Bureau (NICB) and Reliance Insurance investigating insurance fraud.

Michael enjoyed playing golf and he built many sets of golf clubs. He was a communicant and usher at St. Patrick’s Church, Chittenango.

He is predeceased by his sister, Judith Navin.

A Mass of Christian Burial will be Thursday, August 6, at 10am at Immaculate Conception Church, Fayetteville. Burial will be in St. Mary’s Cemetery, DeWitt.

In lieu of flowers, contribution, in his memory may be made to Signal 30 Benefit Fund, 48 Howard Street, Albany NY 12207 (NYSP PBA) or a charity of your choice.
Read Less

Receive notifications about information and event scheduling for Michael

We encourage you to share your most beloved memories of Michael here, so that the family and other loved ones can always see it. You can upload cherished photographs, or share your favorite stories, and can even comment on those shared by others.

I had the privilege to work with Mike and admired his tireless efforts in pioneering the use of search warrants, reaching out to the world as a resource and sharing all he learned. He opened many doors. I continued to work with him after retirement when he joined NICB and we continued our contact and lunches. Again, thank you for sharing him.

Posted Aug 04, 2020 at 10:04am
What a great guy. A hard working Cop who was the bad guys worse nightmare. I got to know him during the Trooper Dillon homicide. A true leader who loved being a Cop. We had many walk and talks at the mall when the Police work was over but never forgotten. We were all lucky to have him in our lives. RIP: Mike
Comment Share
Share via:
LG

Posted Aug 04, 2020 at 09:10am
Matt and family,
Sending you all prayers and love during this tough time. Memories of SU basketball games for YEARS with Mike. Always poking fun at us as we wiggled to fit in our row next to Mike. You really get to know someone sitting so close ❤️ Thinking about all of you. RIP Mike. Leslie and Rick Garcea.
Leslie and Rick Garcea
Comment Share
Share via:
IR

Posted Aug 04, 2020 at 08:41am
It was 1971 in an old VW bus, a couple of young troopers working undercover in the Alex Bay area and then the State Fair. Who can believe that was almost 50 years ago and harder to believe we had the times of our lives. Harder to believe that in the late 90's I encountered twin military sisters in Bosnia who had been neighbors with the Navins, we shared some great stories. Rest in peace my brother, you have earned it. Jack Rucynski
Comment Share
Share via:
DT

Posted Aug 03, 2020 at 03:49pm
My sincere condolences to Mike's family on his passing. I had the pleasure and honor of working with Mike in the N.Y.S.P. Troop D BCI for eight years (1977 to 1985). He was an outstanding BCI Investigator & Senior Investigator that served N.Y.S. in an outstanding manner and was well respected by all. I will always have fond memories of working with Mike, especially on narcotic investigations. Mike will be missed. Dan Thies, N.Y.S.P (Retired)
Comment Share
Share via: 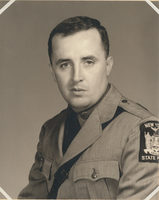