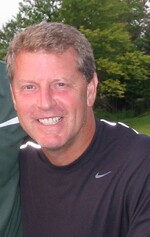 Michael L. Roberson, 65, of Cazenovia, died at his home surrounded by his wife and three sons after a courageous fight with cancer.

Mike’s enthusiasm for life was evident in the numerous adventures he experienced and the friendships he forged throughout his life. An avid traveler, his most valued trips included skiing out west with his sons or biking around Europe with his beloved wife and friends.

An attorney by trade, he recently retired this past July, after practicing law for over 35 years, where he spent the last 28 of them at Carlisle Companies Inc. Before that he honorably served in the United States Navy as a Judge Advocate General. His commitment to the institutions that he served is a true testament to his character and devotion to duty.

Those fortunate enough to have been in Mike’s presence will understand his unique ability to make even the most distant strangers feel like they had known him for years. Mike’s loyalty, encouragement, and keen sense of humor were ever apparent as he was an active member of several organizations and social clubs around Central New York. During the summer one could find Mike golfing at either Onondaga Country Club or Cazenovia Golf Club before spending his evenings on Cazenovia lake with his “chosen family.” Additionally, sharing a Manhattan (on the rocks) and stories with members of the Gyro Club of Syracuse were some of his most treasured memories.

His deep faith and devotion to the Catholic Church were seen by many in the community as he was an active member of the Immaculate Conception Parish since 1993. He was proud to sit on the Parish Council for several years and continued to be a weekly usher.

Mike’s adventurous spirit was most vibrant when exploring the hidden gems throughout the many lakes, trails, and backcountry roads of Central New York.

Although saddened by the loss, the family finds comfort in the manner in which he lived. He is survived by his wife of 40 years, Christy Cotter Roberson; his children, Ty of Portland Oregon (wife Taylor Bortz and grandson Llewellyn Bortz-Roberson), Lee of New Orleans, Louisiana and Will of New York City; and his sister, Terry Roberson Monroy; He was predeceased by his father, Arden “Stretch” Roberson and Alice Frances Detrick Roberson.

Donations in lieu of flowers may be made to the Immaculate Conception Church and Ohio Northern University, 525 South Main St, Ada, Ohio, 45810.