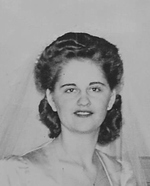 Patricia Maher-Collins was a wonderful and caring wife, mother, grandmother, and friend. Patricia passed away peacefully on December 14th, 2020 at Upstate University Hospital, at the young age of 96.

Patricia was born in Syracuse to Peter and Irene Maher on March 20, 1924. Patricia graduated from the Syracuse Vocational High School. She was the first women hired at the Syracuse General Electric plant when they opened operations in 1942 during the war effort. Patricia worked for the NY Central Railroad before spending 31 years at the Prestolite Corporation in the payroll/accounting department while raising her family. Patricia also served as an Officer for the Syracuse Chapter of the Women’s Business Association. Pat lived through a Depression, World War II, and the first Moon landing. Her experiences shaped her devotion to family and her tireless work ethic.

Patricia was married to John M. Collins on May 11, 1946. Patricia and John were married 46 years until John’s passing in 1993. During their first date John told Patricia he was going to marry her. Pat loved big band music of the 1940’s and could dance the night away whenever she could pull our father off the golf course.

Patricia was a devout Catholic, fiercely independent, always fun loving, compassionate, and loyal to a fault. She deeply treasured her family and friends. She was a wonderful mother who adored her children and grandchildren, who meant everything to her. Patricia easily made friends and maintained those friendships for decades – you know who you are! If you were fortunate enough to meet Patricia, you knew the extent of her grace and the size of her heart. Patricia had a lifelong love of music and was an accomplished musician. She played the accordion in the first ever live musical performance at the WOLF radio station shortly after the start of World War II. She played the accordion for rooftop audiences at the former Onondaga Hotel in the early 1940’s. Patricia was the family biographer with a photographic memory of intricate details of events dating back 75 years. She loved ornithology and historical lighthouses,

Patricia is predeceased by her parents, Peter and Irene; the love of her life, John; and the soul of her incredibly special and beloved son, Michael.

A private family celebration of life was observed at Eaton-Tubbs Fayetteville Chapel on Thursday December 17th. The family will honor Patricia at a larger celebration mass and gathering in the Spring TBA.

Patricia will take a well-deserved rest at Saint Mary’s Cemetery in Dewitt, NY amongst the Maher Family plot, which dates back over a century.

Patricia was a bright and beautiful light on this earth as she will be in Heaven. Patricia will be reunited with her husband, John and son, Michael for a long overdue shot of Jameson.

Irish Eyes Are Smiling Mom – We Love You Always!