To share your memory on the wall of Paul R. Flanders, sign in using one of the following options:

Provide comfort for the family of Paul R. Flanders with a meaningful gesture of sympathy.

Paul loved being with his family and had treasured sharing his last vacation in Turks and Caicos with his entire family. He enjoyed travel, golf, cooking and grilling.

Paul is survived by his wife, Carole Ann and his daughters, Jess and Emily, as well as Tiffany and Shawn Kelly, Brittany and Bill Kittell, and his adored granddaughters, Kennedy, Alexa and Sadie. Paul was excited to welcome 2 more granddaughters expected in November. He is also survived by his brother, Bruce and his family of North Carolina. Paul was predeceased by his parents, Merle and Marian Flanders, as well as his first wife, Paula.

Family and friends may call from 3:00 to 7:00 pm on Tuesday, September 10th at Eaton-Tubbs Fayetteville Chapel, 7191 E. Genesee St., Fayetteville. The funeral will be held at 11:00 am on Wednesday, September 11th at DeWitt Community Church, 3600 Erie Blvd. E., DeWitt. Burial will be in White Chapel Memory Gardens in DeWitt.

We encourage you to share your most beloved memories of Paul R. here, so that the family and other loved ones can always see it. You can upload cherished photographs, or share your favorite stories, and can even comment on those shared by others.

Will Slabaugh and Sarah Campbell, Sara, Emily, Kaitlin, and Abby Andrews, and others have sent flowers to the family of Paul R. Flanders.
Show you care by sending flowers

Posted Sep 12, 2019 at 07:38pm
Dear Jess and Emily
I send you big hugs and prayers for the lost of you father, Paul. It has been a long time since we have seen each other but I think of you girls often. I have wonderful memories of your Mom and Dad at the Crunch games. We all had a lot of fun didn't we! I still stop by your Moms resting spot every time I'm in the area. My thoughts will be with you both moving forward and I am still here if you need anything.
Love,
Megan Corbett Ladouceur
Comment Share
Share via:
SI

Posted Sep 11, 2019 at 10:01am
Dear Carol Ann, Jess, Emily and family,
We've never met, but I am thinking of you this morning. I had the great pleasure of meeting and knowing Paul on the music playground of our formative years, back when NIK and the music was young and fresh. Respected as a versatile, rock solid musician, Paul was also gentle, thoughtful, and kind with anyone and everyone. A good soul!
He loved and was loved. He will surely stay with you, and I hope that this simple truth will help you through the hard days ahead.
Comment Share
Share via:

Posted Sep 10, 2019 at 11:37am
Jess, Emmy, Carolanne and family,
I wish there were words to express just how sad I was to hear the news of your Dad, Paul passing. I also wish I could be there in person to share a hug and let you know just how much I am thinking of you all at this time. There are people who live life and survive in this world then there are people like your Dad who loved life and lived it to the fullest extent. He had fun, had quite a sense of humor as well as your Mom Paula. Meanwhile, my best memory was on Woodbox Rd when he first came home from the hospital and we all had a party to welcome him home. And for some reason, I wrote a rap that he loved and everyone had a good chuckle. He came and helped me set up my midi/music computer which was also great, and I'm sure this just scratches the surface as to his many wonderful encounters he shared in his life. Please know my heart is with you all and will continue to be.
Comment Share
Share via:
LC

Posted Sep 10, 2019 at 11:08am
Please accept the most heartfelt sympathies of Le Moyne College. We hope the love and memories you will forever hold in your heart bring you peace and comfort during this difficult time.
Comment Share
Share via:
WC

Will Slabaugh and Sarah Campbell

Posted Sep 10, 2019 at 09:44am
Please accept our most heartfelt sympathies for your loss - Paul was a treasure and will be missed by his friends at Stephens Inc.

Will Slabaugh and Sarah Campbell purchased the Loving Lilies & Roses Bouquet for the family of Paul R. Flanders. Send Flowers 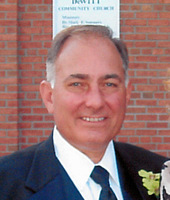