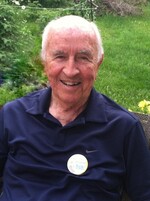 Richard J. Clark, 95, of East Syracuse went to be with the Lord peacefully at home on December 19, 2020. Richard was born in Cortland NY to Elwin and Marjorie (Snow) Clark on June 10, 1925. He moved to Syracuse when he was 7 years old.

He proudly served in the Navy during WWII. Following the war he received an engineering degree from SU. He had a 38 year career at General Electric. Upon retiring in 1989 he continued to consult and spoke in England, Switzerland and Tokyo. He was a member and former president of IEEE.

He was a Boy Scout and served as a Scout Leader and Explorer Leader. He enjoyed telling stories and various disciplines of Scouting. He continued to participate with Scout Reunions throughout his life.

He was a member of the North Syracuse Baptist Church for many years where he was a Deacon and Sunday School Teacher. He is currently a member of the United Church of Fayetteville. He loved to play golf.

He married Anita Rutherford in 1949. They were married for 42 years. He married Barbara Switz Schmidt in 1994.

Richard was predeceased by his first wife Anita in 1989; sister, Elizabeth Jock; and his parents.

He was a loving husband, wonderful father and grandfather. He adored his grandchildren and great-grandchildren. He will be deeply missed. He left a wonderful legacy of faith and love.

A private service will be held Monday. Burial will be in Onondaga Valley Cemetery in Syracuse. A celebration of life will be celebrated later.

The family would like to thank Hospice of CNY for their support.