To share your memory on the wall of Richard Goode, sign in using one of the following options:

If you met Dick, you would never forget him and he never forgot a face.

He was predeceased by his parents, John & Margaret Stack Goode; brothers, John, William and Jerome Goode; and sister, Margaret Durgey.

The family would like to extend special thanks to Dr. Erlebacher and nurse, Vinnie of Crouse Medical Internist.

Services and burial will be private.

Contributions may be made to Hospice of CNY, 990 Seventh North St., Liverpool, NY 13088.
Read Less

Receive notifications about information and event scheduling for Richard

We encourage you to share your most beloved memories of Richard here, so that the family and other loved ones can always see it. You can upload cherished photographs, or share your favorite stories, and can even comment on those shared by others.

Posted Jul 22, 2020 at 05:18pm
"Mr. Goode" is a long time family friend, 60+ years. He got me a summer job. He helped my family move to a new house. He went snowmobiling with us. He broke my minibike when he fell off while popping a wheelie. He wore sneakers when he went swimming in the lake. He could tap a keg the old-fashioned way. He sold me and my friend Fireballs (the jaw breaker) by the case when we rode our bikes to his house. He would stay up late playing "in-between" at the camp. He would toss me into the water when we were swimming. He lent me his pickup truck. He was funny, friendly, opinionated, generous, kind-hearted, "strong like bull", and a whole bunch of other things too numerous to mention them all. I will truly miss him.
Comment Share
Share via:
L@

Posted Jul 22, 2020 at 08:49am
Sue so sorry to hear about your husband. God bless you and your family during this time. Connie Manfrates
Comment Share
Share via:
TM

Posted Jul 21, 2020 at 10:33am
Dick Goode was such a wonderful guy. He would always look out for others. The Goode family is so important to me and Dick was one of the reasons. My prayers and thoughts go out to the family. He was certainly the "Real Deal" Tom Muench
Comment Share
Share via:
RQ

Posted Jul 21, 2020 at 09:39am
Worked with Dick when I was a kid in the summers at DeWitt great guy. Then i worked with him again at Big 4 Tire in our older years we can say that man never stopped . No pain Dickie fly with the Angels my friend. RIP
Rob Quonce
Comment Share
Share via: 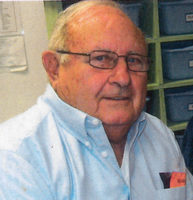