To share your memory on the wall of Robert C. Loomis, sign in using one of the following options:

Provide comfort for the family of Robert C. Loomis with a meaningful gesture of sympathy.

He was a lay Missionary and Bible translator in the Marshall Islands. In his professional career, he was a programmer for Readers Digest, systems analyst for Burroughs Corp. and Carrier Corp., and Computer Systems Manager at SU and ESF.

He was predeceased by his wife of 67 years, Ruby L. Loomis; his parents, Harold V. and Clare M. Loomis; step-mother, Gertrude K. Loomis; brothers, Lynn and Donald; and his sister, Mary Loomis.

A memorial service is planned for the Spring.

Contributions may be made to honorflight.org.
Read Less

We encourage you to share your most beloved memories of Robert C. here, so that the family and other loved ones can always see it. You can upload cherished photographs, or share your favorite stories, and can even comment on those shared by others. 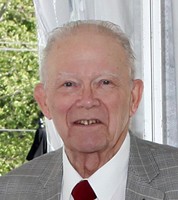