To share your memory on the wall of Stephan S. Everly, M.D., sign in using one of the following options:

Provide comfort for the family by sending flowers or planting a tree in memory of Stephan S. Everly, M.D.

Provide comfort for the family by sending flowers or planting a tree in memory of Stephan S. Everly, M.D.

Print
Stephan Saylor Everly, MD passed away peacefully in Jamesville, NY on June 22, 2019 after a long battle with Parkinson’s Disease.

Steve was born in Indianapolis, Indiana on February 19, 1940. After graduating from Broad Ripple Hig... Read More
Stephan Saylor Everly, MD passed away peacefully in Jamesville, NY on June 22, 2019 after a long battle with Parkinson’s Disease.

Steve was born in Indianapolis, Indiana on February 19, 1940. After graduating from Broad Ripple High School, he attended Indiana University, where he joined the Sigma Alpha Epsilon fraternity, and graduated from the Indiana University School of Medicine in 1964. He joined the United States Air Force and was assigned to a post at Elmendorf AFB in Anchorage, Alaska where he rose to the rank of Major. He eventually settled in the Minneapolis area in 1970. Steve worked in anesthesiology at North Memorial Medical Center in Robbinsdale, MN where he served as Chief of Anesthesiology for numerous years and retired in 1998.

Two things that Steve was passionate about were spending time at the family cabin on Pelican Lake in Minnesota, and playing in a bluegrass band, The Echo Trail Ramblers. He enjoyed bass fishing, sailing, waterskiing, playing tennis and hunting at the lake.

A tribute page to Steve has been set up on the Michael J. Fox Foundation website at https://tribute.michaeljfox.org/tribute-page.php?id=1215.
Read Less

Receive notifications about information and event scheduling for Stephan S.

We encourage you to share your most beloved memories of Stephan S. here, so that the family and other loved ones can always see it. You can upload cherished photographs, or share your favorite stories, and can even comment on those shared by others.

Posted Aug 10, 2019 at 12:53pm
Dear Janet, I was saddened to hear of Steve's death. I knew he had had Parkinson's Disease for many years. He always had that boyish look about him. I have many memories of past years when life was good in the Anesthesia group. I also remember seeing both of you at many concerts as well as dinner establishments prior to the concerts. I did not realize how extensive Steve was into music. I would have loved to hear him play piano, etc. As you may recall, I went back to school at the U of Mn to earn a degree in Music Education - ultimately teaching private piano at my home as well at a local church school. I am still teaching in my home. (One of my daughters has a degree in Music from Concordia, Moorhead, is the Choral Director at Anoka HS and has sung with the Mn Opera since she began at Anoka HS many years ago.) You have so many, many wonderful memories of years with Steve, in your family, travel and, of course, MUSIC. Sincerely, Sandee Stenzel

Dear Sandee, Thank you so much for this beautiful tribute. Your words and memories really mean a lot to us. Kathy, Steve Jr, and Janet
CO

Posted Jul 01, 2019 at 10:18pm
Family of Dr. Everly
It was my pleasure to work with him at North Memorial. I was a CRNA there from 1977 to 2012. I especially appreciated his people centered skill with patients and learned many good things from him. In addition, it was always a real treat to hear him sing and play at social events.
And he shared sour dough starter from Alaska with a couple of us who baked bread. Many pleasant memories of the kind and gentle person he was.
Carolyn Olson
Comment Share
Share via:

Thank you so much, Carolyn, for these great memories of my dad! He loved his North Memorial family. -Kathy 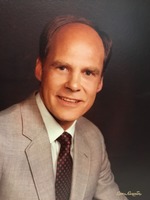