To share your memory on the wall of Thaddeus Kaczor, sign in using one of the following options:

Teddy graduated from Notre Dame High School and attended Utica College before joining the Utica Police Department for 20 years. He was promoted to rank of Sergeant on December 1989 as a Narcotics Undercover Investigator working to keep the city safe with his partner, Jerry Briggs and cherishing the many friendships he developed there. Upon retiring from the UPD he joined the Medicaid Fraud Control Unit investigative department at the New York State Attorney General Office for an additional 21 years.

He married his “Princess” Linda Lee LaFluer on August 1990. They enjoyed a loving 30 years together as soul partners and were rarely apart.

His passions included his Harley Motorcycle, was a member of the Blue Knights as an Honor Guard for returning War Veterans/Lost Service Members and was part of many motorcycle Honor Rides for charity. As an outdoorsman he enjoyed hunting, fishing on lakes and ice, golf outings and downhill snow skiing in the winter months. He was a life-time member of the New York Mills Volunteer Fire Department and enjoyed the annual clambakes with his fellow volunteers.

Teddy leaves behind his beloved Princess Linda, his sister Dianne and Danny Martin of New York, brother Larry and Kelly Kaczor of Florida, sister Lorraine Kaczor of Virginia and several sisters and brothers-in-law. He also had many nephews and nieces who adored him. He leaves three special Godsons Frank Dominick Soldato, Tyler Thomas Kaczor and Chad Michael Martin. He will be missed also by many friends and co-workers who highly respected and loved him. A special thanks to his “partners in preventing crime” especially Chris Burns and Ralph Tortora III (MFCU).

He was predeceased by his parents Thaddeus Sr. and Gladys Dudek Kaczor.

Due to current health concerns and restrictions of the Coronavirus Pandemic, a private family service will be held, there will be no public calling hours. Please stay safe and help flatten the curve in the war against this new invisible Coronavirus enemy.

Linda will be planning a “Celebration of Teddy’s Life” at a future date as our country gets back to a new normal and all those who loved Teddy can then join under sunnier skies.

In lieu of flowers, please consider donating in memory of Teddy to Saint Run Kennel c/o Cathy Zimmer, 31449 County Route 18, Theresa, N.Y 13691 which was one of Teddy’s passions and favorite places to visit at the birth home of his beloved four boxers.

“You are my Sunshine, my ONLY Sunshine, you make me happy when skies are grey, you’ll never know dear how much I LOVE you, please don’t take my Sunshine away . . . till we meet again”
Read Less

Receive notifications about information and event scheduling for Thaddeus

We encourage you to share your most beloved memories of Thaddeus here, so that the family and other loved ones can always see it. You can upload cherished photographs, or share your favorite stories, and can even comment on those shared by others.

Posted Apr 05, 2020 at 12:06pm
Linda,
Just hearing of your loss. You and Mr. Kaczor were great customers to see coming in to William's Restaurant on Friday nights. We always had good conversations and laughs when the two of you came in. He will be forever missed and a great memory for all of us. Love from the gang at William's.
Comment Share
Share via:
JS

Posted Mar 25, 2020 at 07:38am
Dear Linda. What a terrible loss for you. He was among the best officers! Please take care. Fond regards. Joan teuchert shkane
Comment Share
Share via:
DT

Posted Mar 23, 2020 at 02:59pm
Linda, I am so saddened by the loss of Teddy. I still remember the day you and Ted came over to our house with your new boxer “Jack Daniels” Attached to the back of your bike and how we laughed. You are both very cherished friends and I hope you know how much he will be missed and this world has lost a wonderful man. You are in my thoughts and prayers. Debbie
Comment Share
Share via:
JB

Posted Mar 22, 2020 at 03:40pm
condolences to Linda...always enjoyed our rides on bikes..even way back when in Laconia....Teddy was a great man...
Comment Share
Share via:
CC

Posted Mar 22, 2020 at 02:14pm
Dear Linda, Gene and I send our sympathy at Teddy's loss. He as a great guy! We remember the good times we shared together- first in Newport at our house and later at yours. May you find peace in memories of special times you shared. Stay safe- we hope to see you when things are better. In friendship- Chris and Gene Corrigan
Comment Share
Share via: 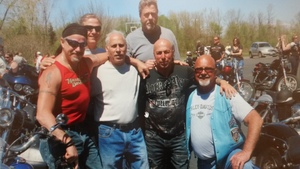 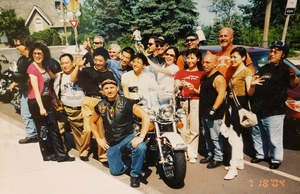