To share your memory on the wall of Thelma R. Dailey, sign in using one of the following options:

Provide comfort for the family of Thelma R. Dailey with a meaningful gesture of sympathy.

She was born in Frederick, PA to LeRoy and Minnie Richard in 1920... Read More
Thelma R. Dailey, widow of retired Syracuse University assistant football coach Ted Dailey, passed away July 30, 2019 at her residence in Jamesville, NY. She was 98.

She was born in Frederick, PA to LeRoy and Minnie Richard in 1920, and grew up in Pottstown, PA. Thelma was awarded a Bachelors of Music Education from Westchester State Teachers’ College and a Masters of Music Education from Pennsylvania State University. During the 1940s, 1950s, and early 1960s, she was prolific as a music educator, choir director, and church organist in Southeast Pennsylvania and suburban Philadelphia. Many of her choirs were recognized for their excellence at the state level. Thelma’s impact on her students was reflected in her induction to the Springfield (PA) High School Arts Hall of Fame in 2018.

She married Ted Dailey, who coached with Ben Schwartzwalder at Syracuse from 1948 until 1973, in March 1964, forgoing her successful career in music education. From 1964 to 1985, Thelma was a common appearance in the Fayetteville-Manlius School District as a substitute teacher, particularly at Wellwood and Eagle Hill Middle Schools.

Thelma is survived by a niece, Carol Walker (Ron) and grand-nephew Mark Walker (Jodie) of Maryland; a step daughter, Nancy Dailey Korzelius of Oklahoma; and a step-son, Lt Col. Theodore E. Dailey, Jr., USMC, Retired, (Joan) of Virginia; and their extended families. The family is thankful for the devotion of Bridget Quatrone and Jen Taylor as a loyal friends and aides to Thelma.

Interment will be at Highland Memorial Park in Pottstown, PA.
Read Less

We encourage you to share your most beloved memories of Thelma R. here, so that the family and other loved ones can always see it. You can upload cherished photographs, or share your favorite stories, and can even comment on those shared by others.

Posted Aug 06, 2019 at 09:02am
My heart hurts to hear of the passing of Thelma. Over my own years at Maple Downs, she would talk endlessly of her love for her family and her teachings. Without fail, she would be at every musical entertainment we had booked, every social hour and a stable at lunch and dinner. She will truly be missed. Thank you for allowing me to get to know you over these past 3 years. My condolences to her family. Posted Aug 02, 2019 at 11:44pm
Springfield High School (PA) students knew Mrs. Dailey as Miss Richards :) She was a top notch teacher and choral director who made it easy for us to experience excellence. We loved her, and/but we probably didn’t even realize how lucky we were to be taught by her. She had us tackle challenging stuff from Broadway scores to Handel’s Messiah. Our seasonal concerts were attended by way more people than just the parents of the performers.

Our class had a 50th anniversary reunion five years ago, and as we reminisced, the superb quality of our music dept came up over and over.

I am smiling now as I remember Miss Richards. I graduated the year she left SHS. While I’m sure her spot was hard to fill, I love that she went on to lead a long and wonderful life in an academic environment — and as a coach’s wife! You see, Mrs. Dailey and I also shared Penn State, and I love college football almost as much as I love music :)

Condolences to the Dailey family. May the memories of happy times bring smiles to you all as you go forward. Miss Richards was a gem.

Posted Aug 02, 2019 at 08:04pm
I grew up down the street from Mrs. Dailey in Brookside, and she and my mother were friends. The Dailey house was always immaculate and the lawn was the best manicured in the neighborhood. Our paths crossed frequently over the years at Wellwood and the Sr. High where she substituted for a lot of my teachers. She was remarkably patient and good natured, which is remarkable considering how we kids treated substitutes in general. Please accept my sincere condolences and rest assured she is in my prayers. Sincerely, Dan Wallace, Maitland, FL
Comment Share
Share via:
TJ 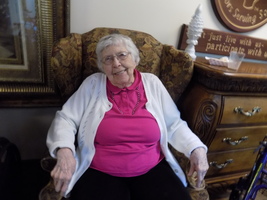