To share your memory on the wall of Thomas Farmer, sign in using one of the following options:

Provide comfort for the family of Thomas Farmer with a meaningful gesture of sympathy.

Born in Clinton on February 24, 1950 he was the son of the late Leslie Farmer and Elizabeth Knap. He was a graduate of Watertown High School, Class of... Read More
Thomas G. Farmer, 69, of Syracuse passed away Wednesday morning, January 1, 2020.

Born in Clinton on February 24, 1950 he was the son of the late Leslie Farmer and Elizabeth Knap. He was a graduate of Watertown High School, Class of 1968 and Monmouth College, Class of 1972.

Thomas worked for Dixon Fisheries' in Peoria, IL for 10 years, then moved to Syracuse, where he and his wife Margaret opened Fins and Tails Seafood for over 32 years.

Thomas was an avid lead guitar player; he played in many bands and in college opened for REO Speed Wagon. He will be remembered for his musical talents. He also was in many wine clubs and was a wine connoisseur.

Celebration of Life will be held at a later date.

Contributions in his memory may be made to the SPCA.
Read Less

We encourage you to share your most beloved memories of Thomas here, so that the family and other loved ones can always see it. You can upload cherished photographs, or share your favorite stories, and can even comment on those shared by others.

Posted Jan 11, 2020 at 11:51am
Dear Margaret -
Nancy & I always looked forward to visiting Tom & you at Fins & Tails - not to mention that your shop was a unique source for fish & advice about cooking, wine, & life. Also for some years a great place of summer employment for our son Nathan. We miss Tom and sympathize with your loss. We hope that the fond memories of your Fins & Tail friends is a condolence.
Eric Schiff & Nancy Mudrick
Comment Share
Share via:
NS

You and Tom gave me my first job twenty four years ago and I learned a great deal from both of you. Tom was always up for conversation on a really wide range of subjects, and chatting with him while I worked made it easy to wash a sink full of dishes or peel ten pounds of shrimp. Since I left Syracuse it had always been a pleasure to go back to the store and talk with the two of you about local developments and what all the old employees were up to. I will truly miss him and will be thinking of you.

Posted Jan 08, 2020 at 10:00pm
RIP Tom. You were a man of great integrity, passion and kindness. Glad I got to know you (even if just a little bit) as a regular for many many years. God bless to Margaret and your family. You will be missed
Comment Share
Share via:
PC

Posted Jan 07, 2020 at 11:21am
Dear Margaret, My late husband, Bud, and I always tried to catch a chat with Tom when he made deliveries. He was a kind and gentle man. You had a wonderful business and I miss the many dishes you prepared and the service you both provided. Please accept my heartfelt condolences. Patti Carey
Comment Share
Share via:
RD

My condolences on the loss of Tom.
A congenial, helpful, and talented man. 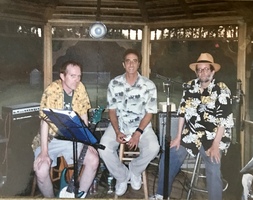