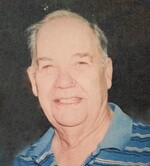 He was predeceased by his wife of 68 years, Bridget (Peggy) Rhodes in 2015, and his son in-law, David Sweet in 2020. He leaves behind his 4 children, Thomas (Ellen), John (Jackie), Ann Sweet, and David (Gail); as well as 12 grandchildren and 23 great grandchildren.

Thomas lived with his family in Chadwicks, NY for over 50 years, worked at Griffiss Air Force Base in Rome, NY for 30 years, and was also involved in the construction of many homes throughout the Utica area. He was a skilled carpenter and craftsman who shared his talents and love for his family through gifts of hand-made desks, bookcases, bread boxes, and toys to the delight of all. His expertise and labor were always available for construction and renovation projects at his children’s homes and were much appreciated.

He was a member of the Holy Name Society, the Knights of Columbus, The Marine Corp League, and The Pearl Harbor Survivors Association.

Thomas served his country for 6 years in the US Marine Corps and was a combatant in 6 major battles including the attack on Pearl Harbor, the defense of Midway Island, and the invasion of Peleliu Island. He was an annual honored participant in the Memorial Day and Fourth of July parades in Fayetteville and Manlius, and received much love, respect, and reverence from all who saw or met him.

His family will “naturally” miss his presence in their lives, but are comforted knowing that he has earned his final honorable discharge and has been reunited with Peggy.

The funeral Mass that was scheduled for Thursday, January 31st has been postponed until Spring. A memorial celebration will be held in the summer of 2021.

In lieu of flowers, the family requests donations be made to Clear Path for Veterans in Chittenango, NY.