To share your memory on the wall of Victoria Kennedy, sign in using one of the following options:

She graduated from the University of Wisconsin in 1965 with a BA in International Relations with High Honors and Phi Beta Kappa. She began her professional career at the State Department Office of Vietnam Affairs. In 1966, she joined the RAND Corporation, where she worked under Daniel Ellsberg researching the organization of the Viet Cong. Attending the University of California, Berkeley, she gained a Master of Public Administration in 1969, after which she joined the President’s Advisory Council on Executive Organization (the Ash Council) in the White House. There she worked on the creation of the Domestic Council, the Office of Management and Budget (OMB) and the genesis of the Environmental Protection Agency for Richard Nixon. During tours with the Woodrow Wilson International Center, National Academy of Sciences, National Commission on Water, and the Temporary Commission on New York City Finances, she worked at the intersection of financial and environmental issues.

Again working on defense matters, at the Naval War College she analyzed Soviet nuclear strength, and at the Department of Defense she worked on nuclear arms control and verification strategies. Under the late William Ruckelshaus, she returned to her ultimate career focus on environmental work, serving at the Environmental Protection Agency in the Water Policy Office. It was there that she combined all her finance, environmental and management skills as Chief, Regulatory and Program Analysis, leading to the creation of State Revolving Funds and Superfund regulations, and drafting the 1987 Amendment to the Clean Water Act. She concluded her full-time professional career as a founder of the Council of Infrastructure Financing Authorities, after she re-married and moved to Syracuse.

She later served on the Board of the New York State Environmental Facilities Corporation, the Onondaga Lake Management Commission, and, having been elected Chair of the Central New York chapter of The Nature Conservancy, she formed the Western and Central New York Chapter to capture administrative, funding and management efficiencies and to broaden the organization’s regional impact. The environment, its protection and conservation, was of great concern to her. In addition to her many visits within the Tug Hill, Montezuma, Labrador Hollow and other precious local ecosystems, the deserts of Southern California and the French Alps were among her favorite haunts.

Victoria is remembered as a lovely, intelligent and multi-faceted woman. An accomplished organist, she loved music of all genres, from classical and opera to rock and roll. She also loved travel, spending many summers in the south of France with her family, as well as Portugal and Spain. There she visited Majorca a number of times in the hope of meeting her determined sports hero, Rafael Nadal, whose tennis matches she watched religiously, whether at the US Open in New York or on television. She was an avid fan of her alma mater’s football and basketball teams, although her relocation to Syracuse thirty-two years ago added SU to the list.

Victoria is survived by her husband, Thomas, and her two children – Matthew Roy Price of New York City and Andrea Elizabeth Kennedy of Fayetteville, and her sister Frederica Heady of Mt. Hermon, California.

She was a member of First Congregational Church of Manchester, Vermont and of Park Central Presbyterian Church in Syracuse, where she served on the Worship Committee.

A memorial service will be held at Park Central Presbyterian Church on Saturday, at 11 AM on February 8, 2020.

We encourage you to share your most beloved memories of Victoria here, so that the family and other loved ones can always see it. You can upload cherished photographs, or share your favorite stories, and can even comment on those shared by others.

Posted Jan 15, 2020 at 03:35pm
Our sincere condolences to Tom, Andrea, and Victoria's family. We met as neighbors when Bell darted across the street and welcomed us to the neighborhood. Victoria had been a loving neighbor for almost twenty years! Always sharing her beautiful love for colorful flowers, especially roses, and superb landscaping! She was so kind to share her pool with our daughter and let us love her fur family members she raised (Bell, Milo, Opah). Rest in peace Victoria, you were an amazing, intelligent women who did wonderful things while on this planet! You will be missed by our family!
Comment Share
Share via:
EB

Posted Jan 14, 2020 at 08:33am
I am so blessed to have had a chance to know Victoria. After reading her obituary I realize I barely scratched the surface of this amazing lady. When we passed the peace at church we made sure to connect. She loved my warm hands. We both had chronic pain and would talk about our good and bad weeks. My thoughts and prayers to all her family.
Comment Share
Share via: 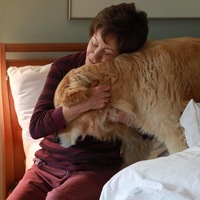 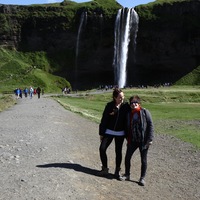