To share your memory on the wall of Edwin "Ted" Marsh, sign in using one of the following options:

Provide comfort for the family of Edwin "Ted" Marsh with a meaningful gesture of sympathy.

He loved farming his famous, "Ted Marsh" tomatoes for over 40 years. Member of the Masonic Lodge. An avid antique collector and window to the history of Onondaga county and most notable would be his multiple "breakfast" meetings at a few different dinners / restaurants throughout the town of Dewitt, East Syracuse and Jamesville. Ted would make the rounds 7 days a week drinking plenty of coffee and exchanging ideas with everyone he met.

Ted's success in life was diverse. He lived to serve his country, his family and his community. Ted lived out his later years in his family's farm house that has now spanned four generations. Ted has touched the lives of so many people throughout his years of public service; he was well known to visit the farmers market every Saturday, morning breakfast with his great group of friends, and Friday night dinners with the guys for over 30 years. Ted provided strong direction to his two sons whom he loved dearly. He cherished his grandchildren like no one else and was always there for them to brighten their days and tell them all of his great lifelong stories.

He is predeceased by his parents and two brothers, Jim and Fred, (Fred was Ted’s twin).

Calling hours will be Friday, February 7 from 4 to 7pm at Eaton-Tubbs Fayetteville Chapel, 7191 E. Genesee St., Fayetteville. Funeral services will be private.

In lieu of flowers contributions in Teds memory may be made to The Francis House, 108 Michaels Ave., Syracuse, NY 13208.
4
Read Less

Receive notifications about information and event scheduling for Edwin "Ted"

We encourage you to share your most beloved memories of Edwin "Ted" here, so that the family and other loved ones can always see it. You can upload cherished photographs, or share your favorite stories, and can even comment on those shared by others.

Flowers were purchased for the family of Edwin "Ted" Marsh.

Posted Feb 05, 2020 at 11:03am
Ted has done so much for our town at our people through out the years. He was always there in time of need or just to smile and say hi. He was the real deal and I loved him for that. Tom Muwnh
Comment Share
Share via:
YL

Your Friends at Maher Terminals LLC

Posted Feb 05, 2020 at 09:16am
Please accept our deepest condolences. We are thinking of you during this difficult time.

Your Friends at Maher Terminals LLC purchased flowers for the family of Edwin "Ted" Marsh.

Posted Feb 04, 2020 at 08:44pm
So sorry to hear about Ted .. My condolences to the Marsh family .. I first met Ted when he would have coffee and donuts at my Dads Donut shop and from that point on we were friends -- He went with me to a couple of parties Time Warner had ... and we had great fun !! Always a gentleman .. My Sincere Sympathy Dan and Tim
Comment Share
Share via: 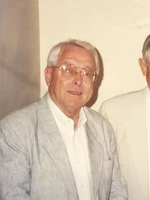