To share your memory on the wall of John Donohue, sign in using one of the following options:

John enjoyed a long career in the life insurance industry, primarily with the Equitable Life Assurance Society, managing the Syracuse, Rochester and Buffalo offices for more than 15 years. As a successful manager/agent he was highly esteemed by those who worked with/for him as well as other colleagues in the industry. John earned the Chartered Life Underwriter and Chartered Financial Consultant designations, and most importantly for him, a Masters in Financial Services Degree from The American College. He also served as President of both the Estate Planning Council of Central New York and the Central New York Chapter of CLU/ChFC Society.

John spent most of his adult life playing softball. He led company teams, church teams and often subbed on his son’s teams as well; nothing made him smile more than hearing his opponents heckle “the old guy” right before he hit a double over their heads. John was thrilled to become part of the Syracuse Senior Cyclones at the age of 56. He continued playing with the Cyclones for 20 years, participating in tournaments around the country and even winning the Senior Softball World Series in Winnipeg, Canada.

John’s faith was also a very important part of his life. He was a beloved member and supporter of several parishes in his life including St. Thomas Episcopal church (North Syracuse, NY), St. Peter’s by the Lake (Old Forge, NY) and Trinity Episcopal (Fayetteville, NY). He served on the vestry and was an usher, giving everyone fist bumps as a greeting. John was a firm believer in helping those less fortunate and supported many favorite charities in Central New York as well as others around the world. As a close friend recently said, “John Donohue’s legacy of giving is all around us”.

Nothing was more important to John than his family. Time spent with them brought him immense joy, whether it was playing baseball or football in the backyard with his own kids and later his grandchildren, watching SU football on tv, or traveling on the ADK Queen on Fourth Lake. John was considered the unofficial mayor of Rocky Point in Inlet, NY where the family has a camp, as he never passed anyone without smiling and a positive comment. Whether he was surrounded by his entire family or just a few, John would always give a heartwarming smile, raising his arms and declaring, “This is happiness!” John’s friends were numerous as he never met someone who didn’t immediately become a cherished friend for life. He epitomized the William Butler Yeats quote, “There are no strangers here; Only friends you haven’t yet met.” Amazingly, he could always find a Utica “Six Degrees Of Separation” with anyone he encountered. He would always ask where they grew up, where they went to school and who has the best pizza in town.

Per John’s request, a joyful celebration of his life will be held once COVID precautions have passed. In the meantime, take time to enjoy your loved ones and spread a little happiness every day.
Read Less

Receive notifications about information and event scheduling for John

Plant a Tree in Memory of John
Plant a tree
0 trees have been planted in memory of John A. Donohue
LS

Posted Oct 11, 2020 at 03:02pm
We send our deepest condolences to the Donahue family, especially to Valerie. We were so sorry to hear of John’s passing. Back in 1976, John hired our Dad Mansukh Shah: an Indian immigrant brand new to America. John saw something in our Dad and hired him. To this day, we remain indebted to him for taking that chance. The Equitable gave our Dad an incredibly career and our whole family the American dream. None of it would have been possible without John. He was kind, generous and as our Dad’s business grew, John was one of his biggest cheerleaders. We will never forget what he did for our Dad and for our whole family. Our Father, Mansukh, was so sorry to hear of John’s passing. Rest In Peace our sweet friend and may you find eternal rest with Brendan and Katy. You will be missed. With love, Mansukh, Surya and Lila
Comment Share
Share via:
BF

Posted Oct 06, 2020 at 03:03pm
In this sorrowful time, Joanne and I extend our heartfelt condolences. John was a great guy whose engaging personality made the joy of life contagious.

I first met John on the softball diamond and eventually joined his "Leftover Team." Winning is a team goal, but in the end, John's approach to foster comradeship and having fun earned the respect and admiration of his players.

John lived a life that few do-always helping others in any way he could, leaving behind a treasure of memories and moments that will be enshrined in our hearts forever.

Mae West sums up John's life very aptly. "You only live once, but if you do it right, once is enough." John did it right!
Comment Share
Share via:
FC

Posted Oct 06, 2020 at 08:18am
There is much I will remember about John but most of all his smile and engaging handshake. John was one of those individuals who could brighten up anyone's day and often, as a new associate in the 80's, I sought him out just for that purpose - and he never let me down.
John and I played softball and basketball together often during those early years and he was always looking out for me. He lived life to his fullest and as a result, he will always be with us and the Equitable family.
Comment Share
Share via:
CM

Posted Oct 05, 2020 at 11:10am
So sorry for your loss. He truly did bring a smile and made me feel welcome when I saw him. I'll remember him with that great smile. Cindy Morris
Comment Share
Share via:
JI

Posted Oct 04, 2020 at 05:20pm
I only met John once (when Debbie cut my hair in the family kitchen), but what a delightful man he was. My sympathy to all the family members. He will be greatly missed; keep your memories alive by sharing them. 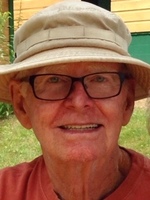