To share your memory on the wall of M. William LeMon, Jr., sign in using one of the following options:

Provide comfort for the family of M. William LeMon, Jr. with a meaningful gesture of sympathy.

In 1957 he married Yvonne Goss of Syracuse. They have three children, Jeffrey (Carol) of Jamesville, April of Jacksonville, FL, and James (Jeanne) of Chatham, NJ. They have six grandchildren, Erica (Paul) Corgel of Arlington, VA, Kelsey of Atlanta, GA, Meghan, Tristan, Graham, and Sadie all of Chatham, NJ.

He joined the Coolican Advertising Agency in 1956 as a copywriter and TV producer. In 1965 he was named vice-president of the agency and became owner upon the passing of his partner, James J. “Bud” Coolican in 1970. He retained the company’s name, Coolican-LeMon, Inc.

Bill was active in numerous community endeavors. He served as president of the CNY Cystic Fibrosis Foundation Chapter, the CNY Bucknell Alumni Club and the Syracuse Exchange. He was the first Christian to serve on the Board of Directors of the Syracuse Jewish Community Center and was honored as their Man of the Year in 1973.

Bill belonged to Drumlins Country Club and was a director of the Upstate NY Chapter of US Lacrosse and a board member of the Blindmen & Criers.

Bill’s blood was Orange, having missed only one home game in 40 years. Traveling to many away games and never missing a Big East Tournament. GO ORANGE!

His wit and humor was paramount in everything he did, even to his last days.

Were he here, he would be the first to thank all his friends for their support. Also, his caretakers, Dr. Tony Scalzo and his staff, The Menorah Park Staff and the East Syracuse Walmart Pharmacy for their care, compassion, understanding and kindness.

A graveside service will be at Noon on Tuesday, August 13 at St. Mary’s Cemetery in DeWitt. Please use the Randall Road entrance.
Read Less

We encourage you to share your most beloved memories of M. William here, so that the family and other loved ones can always see it. You can upload cherished photographs, or share your favorite stories, and can even comment on those shared by others.

Don & Ursula Blaskiewicz and The McClain Family have sent flowers to the family of M. William LeMon, Jr..
Show you care by sending flowers

Posted Dec 27, 2019 at 06:10pm
I was not aware that Bill had passed until I saw it on TV9 on De. 27th. Bill sent many printing projects our way (Speedway Press, Inc.) including SU basketball and football programs, Syr. Sports Hall of Fame, and Boxing Hall of Fame. Not only was he a pleasure to work with, but over the years, my brother George and I became good friends with Bill. He advocated on our behalf four auto racing legends into the Sports Hall of Fame. A belated Godspeed, Bill and condolences to the family.
Doug Caruso
Oswego
Comment Share
Share via:
AH

Posted Sep 28, 2019 at 04:51pm
Bill was an extraordinarily fine person - generous, thoughtful, and kind, whom I was fortunate know in Lewisburg, PA, and later in Aurora-on-Cayuga, NY. The world is much the poorer without him.
Comment Share
Share via:
RS

Posted Aug 13, 2019 at 09:57am
I was unfortunate to only have met Bill once at the local diner. He shared a table with us and sat down as a stranger but by the time we left he felt like a friend. While talking with Bill, I discovered than he was Jeff's father who I waterski with on occasion but never had the opportunity to meet before. What a gentleman! My heartfelt condolences go out to Jeff and Carol and Bill's entire family.
Robert Smith
Comment Share
Share via:
DB

Posted Aug 12, 2019 at 08:43pm
Our warmed heartfelt sympathies. We pray that you are all rest assured that Willy has been called home and is in God's comforting hands .

Posted Aug 12, 2019 at 08:38pm
---MY CONDOLENCES TO THE FAMILY OF BILL LEMON. I WILL MISS HIS QUICK WIT AND GREAT SENSE
OF HUMOR. I FIRST MET BILL AND THE COOLICAN BROTHERS MORE THAN SIXTY YEARS AGO.
WHAT A GREAT TEAM THEY WERE. BILL WAS A GREAT SALESMAN.
REST IN PEACE MY FRIEND.
----ROD WOOD
WSYR-TV 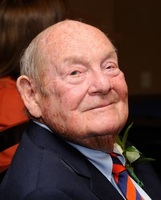