To share your memory on the wall of Ronald Shedlock, sign in using one of the following options:

Provide comfort for the family of Ronald Shedlock with a meaningful gesture of sympathy.

Print
Ronald Francis Shedlock, 69 years old, a native of Pompey, NY, passed away January 6, 2020 in Syracuse, NY at his home.

Ron was a veteran of the Vietnam War, serving in the Navy aboard the USS Kennedy.  During his service, he learn... Read More
Ronald Francis Shedlock, 69 years old, a native of Pompey, NY, passed away January 6, 2020 in Syracuse, NY at his home.

Ron was a veteran of the Vietnam War, serving in the Navy aboard the USS Kennedy.  During his service, he learned his trade as a stationary engineer and later expanded his skills to be an HVAC mechanic that led to a dedicated thirty-four-year career at Bristol-Myers Squibb in East Syracuse, NY. He is remembered by colleagues for his work ethic, expertise, and kindness.

Ron is survived by the joys of his life, his two daughters, Pamela (John) Herrington and Alison (Kenneth) Gorbatov; and grandchildren, Abigail and Bradley Herrington and Nicholas and Juliette Gorbatov; and Kathleen Shedlock, mother of his children and life-long friend and advocate. He was very proud of his daughters’ and grandchildren’s accomplishments, both athletic and educational. Ron is also survived by his brother, Donald (Colleen Dowd); and sisters, Ann (Terry) Christmas and Mary Shedlock (James Mizner); and several nieces and nephews, extended family and friends. Ron was predeceased by his parents, Elizabeth (Betty) and Tom (T.R.) Shedlock.

Calling hours will be held from 7-9 pm on Thursday at Newell-Fay Manlius Chapel, 8171 Cazenovia Rd, Manlius, NY 13104. A family service will be held in Manlius on Friday morning at 9am, followed by a private burial at the Saratoga National Veterans Cemetery.

In lieu of flowers, donations may be made to Clear Path for Veterans, 1223 Salt Springs Road, Chittenango, NY 13037.
Read Less

We encourage you to share your most beloved memories of Ronald here, so that the family and other loved ones can always see it. You can upload cherished photographs, or share your favorite stories, and can even comment on those shared by others.

The Maceros and Don, Ann, Mary and our families have sent flowers to the family of Ronald F. Shedlock.
Show you care by sending flowers

Posted Jan 09, 2020 at 07:37pm
My condolences to the family. I went to grammar school with Ron in Fabius. He was a great guy. He will be missed.
Comment Share
Share via:
TM

The Maceros purchased the Peaceful White Lilies Basket for the family of Ronald Shedlock. Send Flowers

Posted Jan 08, 2020 at 07:41pm
Dear Ann, Mary, Donnie and families,
We are so very sorry to hear of cousin Ronnie's passing. A kind, soft spoken and gentle soul, Ronnie was always so easy to talk to and reconnect with. As you all remember, our memories go all the way back to our childhoods. Our parents incredibly strong bonds were the basis of ours.
Please know that you all are held dear to our hearts. Family is family and there is no stronger bond than that.
With our love and sympathy,

Don, Ann, Mary and our families

Posted Jan 08, 2020 at 12:53pm
Ron, You will surely be missed. You were the kindest person that God ever made. We have lots of memories growing up with you. RIP

Don, Ann, Mary and our families purchased the Sentiments of Serenity Spray and planted a memorial tree for the family of Ronald Shedlock. Send Flowers

Posted Jan 08, 2020 at 11:49am
Joyce and I wish to extend our condolences to you and your family on the loss of your husband, father, grandfather, great grandfather, and friend. He has passed on to the next world, but the memories of your life together will remain with you. May you remember the good times and the cherished time, and a smile come to your face whenever you think of him
With our deepest sympathies,
Joyce and Paul Szemkow
Hallmark Poem:
Love will live forever in the memories you keep.
Time cannot erase a love so beautiful and deep.
Love is why your heart today feels emptiness and sorrow,
And love is what will bring you joy again in some tomorrow.
For love is everlasting and love is very real,
And nothing in this life can take away the love you feel.

P.S. : My father-in-law, who was a WWII veteran and medal winner, is also interred at Saratoga National Cemetery. It is a wonderful place to visit.
Paul 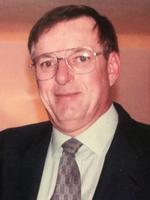