To share your memory on the wall of Vinod B. Kavety, MD, sign in using one of the following options:

Provide comfort for the family of Vinod B. Kavety, MD with a meaningful gesture of sympathy.

Ever the trailblazer, Vinod came to the United States in 1962. Several years of medical education and hard work took him from Canada to New York City to ... Read More
Vinod B. Kavety, M.D. passed away in Syracuse NY on 8/20/19. He was 81 years old.

Ever the trailblazer, Vinod came to the United States in 1962. Several years of medical education and hard work took him from Canada to New York City to the U.S. Virgin Islands and back again. He returned to India to marry and returned with his lovely bride in 1970. Determined to create a prosperous life for himself and his family, he worked tirelessly to succeed in everything he attempted. Eventually he settled in Syracuse, NY with Lakshmi and their two daughters.

For over 40 years, Vinod has touched countless lives. Opening a medical practice with Lakshmi, he practiced pediatrics until his retirement in 2004. The amount of children who loved him and were helped by him is countless. Vinod was respected immensely by all his colleagues who were proud to call him friend. Throughout his wonderful life in Syracuse, Vinod has been a pillar in the Indian community, beloved by all who were blessed to know him.

Vinod is survived by Lakshmi, his loving wife of 48 years; and his cherished daughters Suchitra (Collin) and Vanita (Mark). He leaves a legacy of love and devotion to his adored grandchildren, Maya, Sara, Nate and Noah. Vinod is remembered as the patriarch of his large and loving extended family, nieces and nephews both in the U.S. and India. He is pre-deceased by his parents, his mother in law and his seven brothers.

We encourage you to share your most beloved memories of Vinod B. here, so that the family and other loved ones can always see it. You can upload cherished photographs, or share your favorite stories, and can even comment on those shared by others.

Rajeev, Jayashree and Vaishnovi Kavety, Blanca Werner, and others have sent flowers to the family of Vinod B. Kavety, MD.
Show you care by sending flowers

Posted Aug 28, 2019 at 11:22am
Vinod will be very much missed at Petit Branch Library, where he was a volunteer income tax preparer after he retired. Many people asked for him as a preparer, year after year.
Comment Share
Share via:

Posted Aug 25, 2019 at 09:08pm
Dr.Kavety was my childrens pediatrician for many years.He was a very compassionate and understanding man! He helped get our family through some very tough times with our children and their illnesses! I will never forget receiving a sympathy card from him after my oldest daughter passed away! This meant so much to us!! Condolences to all of his family and loved ones.You certainly had a GREAT man in your lives! Tom and Robin Williams
Comment Share
Share via:

Posted Aug 24, 2019 at 12:05pm
Our heartfelt condolences with thoughts and prayers to all family and friends.
Gireesh, Sreedevi, Vignesh and Akash. Farmington, CT.

Posted Aug 22, 2019 at 11:09pm
Our family's dear friend and our neighbor, Vinod showed a humor and patience with our children that give me a good idea of how special it must have been to have Vinod for a family doctor. He was a truly special person, and I feel grateful I got to share some fun times while he lived next door. Lakshmi, we are still, and will always be happy to call you our good friend and we trust you will call on us whenever you need anything at all. I think it would make Vinod happy if you will continue to make dosa for us once in a while, and of course, any time you need a ride in the van or need help trimming a high branch, I am your man. Lakshmi (and Suchitra and Vanita) I wish I could be with you this week. I send you my love from NYC. See you soon. Jim True-Frost.
Comment Share
Share via: 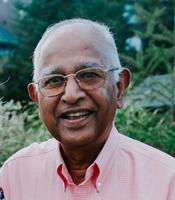